Editons Hirlé in the tradition of the publishing house Flammarion (Paris) 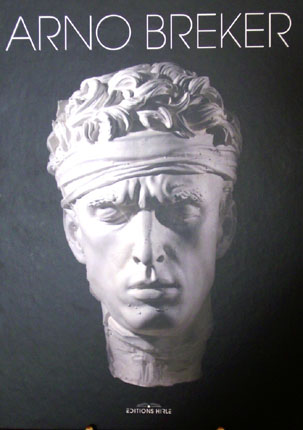 „The Wounded", a portrait-bust by Arno Breker. The title page of the book by the French publisher Editions Hirlé. A document of art history about the most significant sculptor of the Classical Tradition in the 20th century.

Paris/Strasbourg (mea) The prominent French publishing house Editions Hirlé has published a magnificent pictorial volume about the sculptor Arno Breker (1900-1991) . The publication was released as a catalog for exhibitions of works from the art collection of the 'Museum Arno Breker'.

The unusual photos by the French photographers in black & white and in color were taken, among others in the Museum's various exhibitions as well as of artworks displayed in public areas. These are artfully supplemented by contemporary photos from the 'Classical Period', which also belong to the Museum's collection.

With this catalog, the publishing house Editions Hirlé (Strasbourg) has achieved a valuable contribution to the scientific presentation of the artistic work. At the same time, the publisher continues the tradition of the publishing house Flammarion, which had published the pictorial volume 'Arno Breker' in 1940s. It was the catalog for the artist's exhibition in the Orangerie in Paris. The expert author was at the time the sculptor Charles Despiau. He belonged to the first-rank sculptors in France, together with Auguste Rodin and Aristide Maillol. After Despiau, Arno Breker became the fourth artist in this group of artists of the Classical Tradition in Europe.

In his foreword 'The Beauty and the Divine in Art', the art historian B. John Zavrel honored with Arno Breker also all those artists around the world who do their creative work in the image of Creation. Appropriately, Consul Zavrel quotes the Pope John Paul II and his message to the artists of the world, given in Rome in 1999.

Especially remarkable are the excellent photographs in this French-German exhibition catalog of the works of Arno Breker. Ronald Hirlé has personally taken all the photos of Breker's artwork on public display. For this, he used a "Leica Digilux" camera. To these have been added historical photographs by Charlotte Rohrbach, which are exhibited at the Museum Europäische Kunst (at the Nörvenich Castle near Cologne, Germany.

The editorial composition was masterfully done by the internationall book designer and publicist Sandrine Woelffel (Paris). She composed the publication in a modern, balanced French style. She produced, according to art historians, also a 'visual masterpiece.'