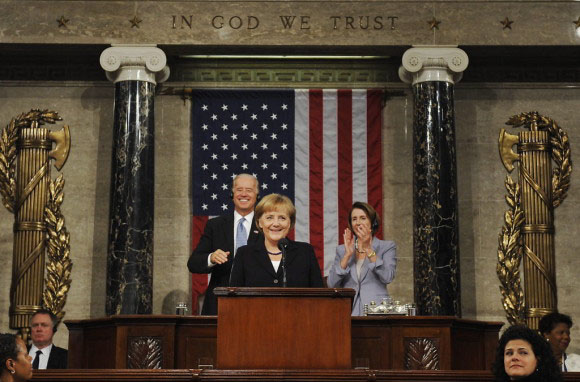 A Happy day in Washington: The speech that Angela Merkel held in front of the House of Representatives and the Senate of the US Congress in Washington was a rare honor. The Chancellor hopes that this has helped bring Germany and America even closer. After the event, Merkel said it had been "an extremely moving morning".

Washington/Berlin (bpb) The German Chancellor Angela Merkel paid her first visit abroad after the German election to USA. The new "old Chancellor" is since November 2009 governing with the Free Democrats (FDP). The former partner, the Social Democrats, lost the last elections. In Washington Merkel was warmly received. In her political talks and speeches she made it very clear again: Germany will be also in the future on the side of the United States to fight for a better world. She gave the impression that all Germans agree with the slogan: "In God and USA we trust."

In her speech in front of both houses of Congress, Chancellor Angela Merkel expressed great thanks for the support of the USA for German reunification. The partnership with the United States is very important for Germany, Merkel said. President Obama too praised Germany: it is an "exceptionally strong ally".

Angela Merkel declared that it was a "great honor" for her to have the opportunity to speak in front of both houses of Congress. The Chancellor met briefly with President Obama for talks at the White House before giving her address on Capitol Hill.

It is Time to say "Thank you"

Angela Merkel took the opportunity during her speech to look back to the day the Berlin Wall crumbled, on November 9, 1989, and to thank the USA on behalf of all of Germany. American support was instrumental in ensuring German reunification.

Looking forward, Angela Merkel went on to the topic of globalization, which she deemed a huge opportunity for the world. She advocated seeking common solutions and reflecting multilaterally. America and Europe have not always been of the same opinion, she remembered. But their fundamental common values unite Europeans and Americans. There is no better partner for Europe than America, she declared. Then she added: and no better partner for America than Europe.

In her speech Angela Merkel called on her audience to pull down today's walls. We must, she declared, create peace and security, ensure prosperity and justice and halt climate change. Although the Cold War is now over, there are still walls to be pulled down. Tolerance is particularly important in this regard.

In this context, Angela Merkel addressed Iran. This country must not be allowed to threaten Israel, she said, "The security of Israel will never be negotiable for me. This is in any case not only a threat to Israel but to the entire free world." This is why the free world must counter the threat, with sanctions if necessary.

The Chancellor also touched on the Afghanistan mission in her speech to Congress. She had discussed future strategy with President Obama prior to her address.

The President praised Germany's contribution to establishing peace and security in Afghanistan. Germany has done much to enable Afghanistan to take on greater responsibility for its own security, he said.

Chancellor Angela Merkel also looked at the global financial crisis. Economic policy must be more sustainable in order to achieve the goal of prosperity and justice, she said. The global economy needs a global regulatory framework so that there is no repetition of a crisis of this sort.

The Chancellor sees another major challenge for the 21st century in the need for urgent action to protect the natural resource base and the global climate. (In this important questions the USA are not as cooperative as the Western European countries want to have it). She is happy that President Obama accords great importance to climate protection, Merkel told Congress. She added that agreement must be reached at the Climate Change Conference in Copenhagen in December. Global warming must not be allowed to exceed two degrees Celsius, she stipulated.