'Swami Hari: I am a simple forest monk' 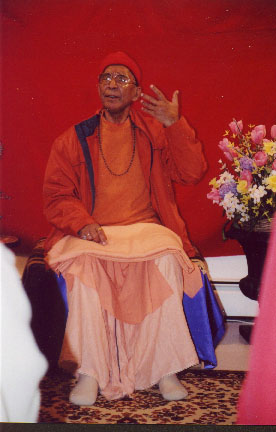 The Himalayan sage Swami Hari gives a lecture at the Museum of European Art in 2005.

Rare and fateful are those moments in one's lifetime, when one comes into direct contact with a personality that indelibly changes the course of one's life. The Himalayan sage Swami Hariharananda, affectionately known as „Swami Hari" was one of such personalities in the early days of the 21st century.

He was a direct disciple of the legendary Swami Rama of the Himalayas. For twelve years he lived, took care of and rebuilt the ancient Tarkeshwar Temple in the Himalayas, a place where his Master Swami Rama attained enlightenment. Tarkeshwar is one of the most special pilgrimage places for the worshipers of Lord Shiva. Here, Swami Hari lived and worshipped alone for many years, and witnessed many miracles brought about by his ‚grandfather'--as he liked to call Lord Shiva.

Soon after his Master Swami Rama left his body in 1996, Swami Hari left Tarkeshwar: first, to visit all the yoga and meditation centers that Swami Rama had founded in the United States since 1969; and second, to continue the work of Swami Rama and the Lineage of the Himalayan Masters.

Swami Hari's first visit to the United States in 1999, his teachings, travels around the country to come in touch with old students of Swami Rama, and his subsequent annual visits to America are the subject of the new book by Daniel Hertz, SWAMI HARI: I AM A SIMPLE FOREST MONK.

It is a collection of essays about the life, work and teachings of Swami Hari during his visits to the United States between 1999 and 2007. Interesting photographs, several poems and brief excerpts from Swami Hari's lectures give the reader additional insights into the personality of this ‚simple forest monk', as he liked to call himself. But his students and friends knew better. Swami Hari was an example of a modern-day sage, accomplished spiritual guide and devoted disciple of his Master. He appeared suddenly, as if from nowhere, and a few years later his health deteriorated to such a degree that he could no longer travel. Yet, during the few years that he traveled around the United States, he got to meet many spiritual students and seekers, mainly through the grace of Swami Rama's leading disciple, Swami Veda. It was Swami Veda, who made the necessary introductions in the beginning, and gave him much support through the Meditation Center in Minneapolis and other yoga and meditation groups that he had founded across the United States and around the world.

But teaching and giving special guided meditations which enabled one to greatly deepen one's meditation practice were not all that Swami Hari accomplished. As students would give him love offerings, he used the money to start a technical and vocational school in the Himalayas. The place selected for it was in the town of Malethi, located near Swami Rama's birthplace in Toli. Starting with nothing, by the time Swami Hari left his body in June, 2008, several buildings of the school complex were up and running, and had 90 students enrolled in one of four programs: electrical work, plumbing, computer programing and operation, and tailoring and sewing. New initiatives are being developed now, including the cultivation of herbs and roses. In these remote Himalayan places, these educational opportunities are of the greatest value to the young people: they give them a chance to learn a useful trade, and then be able to make a living in their home area, instead of moving away to a large city in search of work.

The book describes all of this and more. Those who knew Swami Hari will at once recognize his modest, cheerful and loving personality through the words of the author. The words and thoughts contained in this remarkable book will bring into their hearts the fond memories of Swami Hari and his life and work--both dedicated to serve his Master and to help others.

To order your copy of the book and to find out more information about Swami Hari's school project, visit http://sites.google.com/site/iamasimpleforestmonk/home , or contact the author, Daniel Hertz at SimpleForestMonk@gmail.com