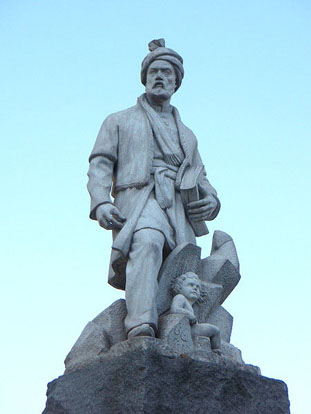 Monumenal memorial to the great Iranian poet Ferdowsi, the author of the 'Shahnameh' trilogy in his birthplace, now renamed to Shahnamed Town.

Tehran/New York (meaus) The birthplace of the Iranian poet Ferdowsi, 'Dieh Paj' in Tous, in the Khorasan Razavi province will be renamed Shahnameh Town on the national day of Ferdowsi on May 15, 2009.

The project includes renovation of the place, Ferdowsi Foundation director Mohammad Hossein Tousivand told Mehr News Agency. "Several workshops will also be set up in Ferdowsi Park, where visitors can read Ferdowsi's great epic 'Shahnameh' via 3D images," he said, adding that a sport complex will be set up in the town.

"The Middle Eastern states of Tajikistan, Afghanistan, Turkmenistan, Uzbekistan, Pakistan and Kyrgyzstan were home to the Dari Persian language and were the birthplace of great masters such Rudaki, Avicenna, Jami, Rumi, and Nezami," he explained.

He further noted that the foundation has also arranged a commemoration ceremony for Ferdowsi in Berlin, Germany from September 11-12, 2009.