Barack Obama and his triumphal visit in Europe

The highlight was his speech in Prague against nuclear weapons 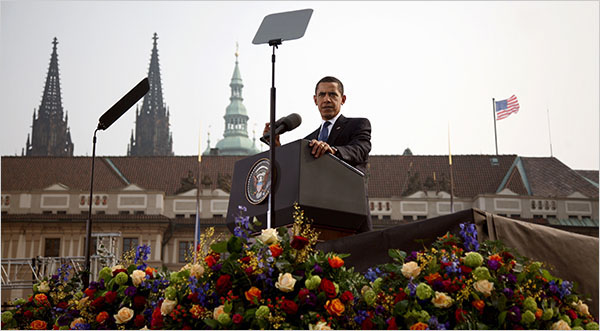 US President Barack Obama in Prague. He and the First Lady Michelle Obama met the Czech president Vaclav Klaus and his wife Livia Klausova, as well the former president Vaclav Havel. Mr Obama pledged that the United States would lead the quest for a world free of nuclear weapons.

Washington/Prague (bpb) US President Barack Obama's first official visit to Europe in April 2009 was a political and personal success on all fields. The reason for this one-week journey was first of all to discuss the world economic crisis at the G-20 Summit in London. But the highlight of his visit in England, France, Germany, Czech Republic and Turkey was his memorable speech against nuclear weapons in Prague. More than 30,000 Czechs and foreign tourists crowded into Hradcany Square outside the medieval Prague Castle, in order to hear Obama speak about peace and security in the world. President Obama set out his vision for a world free of nuclear weapons, vowing to involve all states with nuclear weapons in the process of reducing their arsenals.

Obama pledged that the United States would lead the quest, and denounced "fatalism" over nuclear weapons proliferation. "As the only nuclear power to have used a nuclear weapon, the United States has a moral responsibility to act," he said. "We cannot succeed in this endeavor alone, but we can lead it. Obama continued: "So today, I state clearly and with conviction America's commitment and desire to seek the peace and security of a world without nuclear weapons. I am not naive--this goal will not be reached quickly, perhaps not in my lifetime."

In an open-air speech, he said that if the nuclear threat from Iran were eliminated, this would remove the driving force for building anti-missile defences. The Czech Republic is one of two sites in Eastern Europe for a planned US missile shield that has angered Russia. Washington says that the shield is necessary to counter threats from what it calls rogue states such as Iran. "As long as the threat from Iran persists, we will go forward with the missile system," Mr Obama said. "If the Iranian threat is eliminated, we will have a stronger basis for security, and the driving force for missile construction in Europe will be removed."

'Concrete steps' to be taken

President Obama committed himself to reducing the US nuclear arsenal, bringing the Comprehensive Test Ban Treaty into force and seeking tough penalties for countries that broke the rules on non-proliferation. "The United States will take concrete steps towards a world without nuclear weapons," he assured a cheering crowd.

Mr Obama said that doing nothing to stop the spread of nuclear weapons should be not be an option. "Some argue that the spread of these weapons cannot be stopped. Such fatalism is a deadly adversary." He said that North Korea had broken the rules with a rocket launch earlier that day, and called on Pyongyang to abandon its efforts to acquire nuclear weapons.

In London, Obama and the First Lady Michelle Obama were received in the Buckimham Palace by the Queen Elizabeth II for 20 minutes. No one else from the leaders of the 20 nations at the G-20 Summit got this privilege. The Queen and Prince Phillip gave a reception for all of the statesmen at the summit.

President Barack Obama visited Prague to join the EU Summit. It was scheduled on the initiative of the Czech Prime Minister Mirek Topolanek, representing the current Czech presidency of the European Union. In the capital, Obama and the First Lady met the Czech President Vaclav Klaus and Czech First Lady Livia Klausova, as well the former president Vaclav Havel. Obama used his visit to the Czech Republic (the current holder of the rotating EU presidency) to deliver a keynote speech on nuclear proliferation, as the world observed provocations from North Korea.

The political leaders from the allied states paid highest respect to Obama. The European press and other media were on his side. At the same time, he had to recognise that he is not everybody's darling in Europe. In all countries that he visited, protests and demonstration were held against Obama and "the way how the USA wants to rule the world". Angry protests were also held against the NATO summit in France. Masked youths hurled gasoline bombs, smashed windows and ransacked shops.

The president's new strategy at the meetings was to listen carefully to the allied friends and partners. Obama gave them the feeling that they are more respected than in the time of the former president George W. Bush. At the same time, Obama pointed out the unchanged desire of the United States for preserving its world leadership. In this way, Obama made it clear: America first! From the man on the street, this was to be heard: 'It does not make any difference, if America is governed by a white or a black man. The general global policy will not change.'

In France, President Obama took part at a two-day summit in Strasbourg, marking NATO's 60th anniversary, jointly hosted by the French President Nicolas Sarkozy and the German Chancellor Angela Merkel. He met with Merkel privately for confidential talks , and then attended a working dinner with NATO leaders in Baden-Baden (Germany). Earlier, the White House aides said that Obama will press his case for the allies to send more troops in Afghanistan; this was expected to be a hard sell with his new friends.

After the NATO summit, the French President Sarkozy said that the alliance was quick to endorse Obama's new strategy, because it responded "point by point" to a long-standing European desire to put less emphasis on military attacks against the Taliban, and more on building Afghanistan's army and civilian institutions.

NATO members agreed at the summit to send 5,000 additional troops and trainers, including 3,000 soldiers, who will help provide security during Afghan elections in August. But the pledges are unlikely to silence critics who say that the war is becoming increasingly "Americanized." The United States has 38,000 troops in Afghanistan, more than all the other national contingents put together. Obama has said that he will add an extra 17,000 combat troops as well as 4,000 others to help train Afghan officials.

President Obama took part in a wreath-laying ceremony for Mustafa Kemal Ataturk, the founder of modern Turkey. In Istanbul Obama visited a mosque.

After his 'nuclear-free world speech' in the Czech Republic, Obama fkew to Turkey to meet President Abdullah Gul and Prime Minister Recep Tayyip Erdogan. In the Turkish capital of Ankara, Obama honored the memory of modern Turkey's founding father Mustafa Kemal Atataturk, by participating in a wreath-laying ceremony at Ataturk's tomb. In a speech in the Turkish parliament, president Obama said that progress on the global economic crisis is an example of a collaborative relationship between Turkey and the United States. The two countries came together to ensure that the world's largest economies took strong and coordinated action to address the crisis.

Obama told the Turkish parliament that the two countries can work together to pursue prosperity in the future. He highlighted energy and climate change as areas of upcoming collaboration. He says that the United States will continue to support Turkey's central role as an East-West corridor for oil and natural gas.

Mr. Obama's two-day visit to Turkey was his first trip to a Muslim nation, since becoming President in January. The visit was of great political importance, since Turkey, the country on two continents, is a member of the North Atlantic Treaty Organization (NATO), and in this position a part of the security system of the USA.

At the end of the journey, president Obama stopped over in Iraq to meet US soldiers. The GI's were surprised, since the visit was kept top secret and no one from the troops expected the president. No doubt, all soldiers were happy to see the president "on the frontier against terrorism". 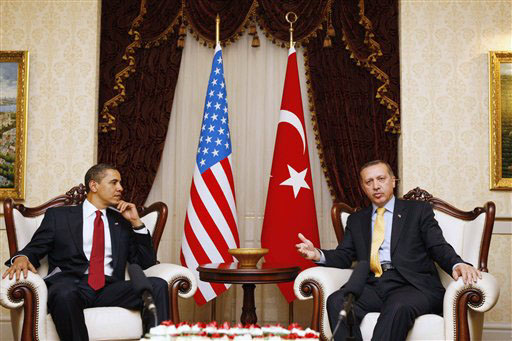 President Obama's first visit to Turkey, a Muslim nation. He assured President Abdullah Gul and Prime Minister Recep Tayyip Erdogan of his desire to strengthen the cooperation in many areas between USA and the NATO member Turkey.