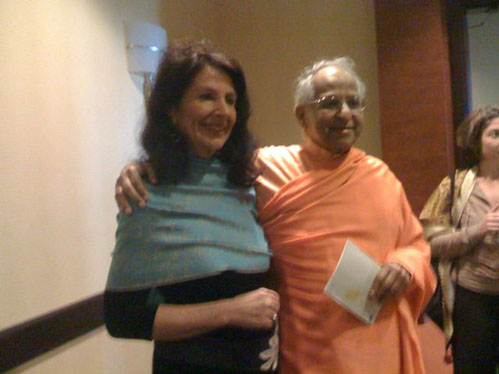 Swami Veda Bharati with Rama Jyoti Vernon after their conversation on the afternoon of March 7, 2009, at the 2009 Symposium of Yoga Therapy and Research in Los Angeles.

Los Angles (meaus) The 2009 Symposium of Yoga Therapy and Research (SYTAR) in Los Angeles, California took place in March, 2009. It was jointly organized by the International Association of Yoga Therapists and an outreach of Ivan and Veronica Zador and Yoga Developments.

The Himalayan sage Swami Veda taught three sessions during the symposium. On Friday, March 6, he led a workshop on beginning meditation. Then on Saturday afternoon, he and Rama Jyoti Vernon joined in discussion about the state of the art of the world, how to enjoy it and help it along, about bringing peace into our own lives and into our relationships. On the last day, Swami Veda presented the closing keynote address. He shared with the audience a very personal story, and sent a message of support to all Yoga teachers, therapists and practitioners.

During the program sessions, Randall Krause, Susan Fogerite Gould,  and Jan Semling, assisted by giving the audience some joints and glands exercises and deep relaxations.

For the keynote address at the end of the symposium, came from New Jersey Susan Fogerite Gould, Ph.D. She lead a short, elegant seated relaxation, thus preparing the bigger group for what was to be a major message to those assembled. Jan and Dave Semling came to Los Angeles from north of San Francisco.

Part of the Symposium for the past three years has been the "booth" of AHYMSIN. A little bit of floor space, but the best site on premises. It was staffed by volunteers from the Southern California AHYMSIN, and coordinated by Randall Krause, who assisted Swami Veda during the entire visit in California. His students represented our Tradition, sold books, pamphlets, malas, and passed out leaflets and other information. Not much money is collected at the booth, but the exposure, interest, literature folks pick up, and general goodwill always create a good atmosphere and help the mission in a significant way.

"Special thanks to Jan and Dave Semling who always provide lovely printed materials free of charge, and at great expense in time and staff to our efforts", said Amy Gage, a long-time student of Swami Veda. 'They make CDs, books, pamphlets, all totally in support of Swami Veda's mission, and continue to educate people about our lineage and philosophy. Jan and Dave Semling have served all of us so quietly and with poise, and total unselfishness for decades and decades".

During the meditation on Friday during the first one of the major gatherings, Swami Veda lead an overflowing group in an introduction to meditation, its value and practice. Randall Krause had prepared the very large group, one of many simultaneous workshop offerings, by leading the participants in gentle joints and glands exercises, and then gave a short relaxation. Much of Yoga in America has been focused on the physical practices. Swami Veda offers a deeper, more intricate experience for the yoga practitioners. "He leads in pure, simple clarity--that if feels like advanced practices, especially to those people who are not used to meditation. It felt like a miracle--in a large hall, 200 people all in stillness and silence--with the great Himalayan sage", according to Amy Gage, one of the organizers.

The next day, Swami Veda and Rama Jyoti Vernon gave a joint presentation. They had met during the International Conference of Meditation and Science in India in 2002. Rama had brought a group of her long-time students from the United States to meet Swami Veda in Rishikesh at the Swami Rama Sadhaka Grama. Last year, during the 2008 SYTAR symposium, Swami Veda and Rama had conversations about the future of Yoga in the United States. The conference developers asked them to join in a discussion to continue addressing the subject of 'Yoga in the World'.

Rama has also traveled all over the world, bringing the concepts of the Yoga Sutras into cultures that are in conflict, applying the ancient truth from Yoga scriptures to the problems of our time. Her work has had beneficial impacts in peace efforts in the former Soviet Union, in the Near East, Afghanistan, etc. The conversations between Swami Veda and Rama gasve them both enrichment and inspirations, and laid the foundation for Swami Veda's concluding remarks the following day. 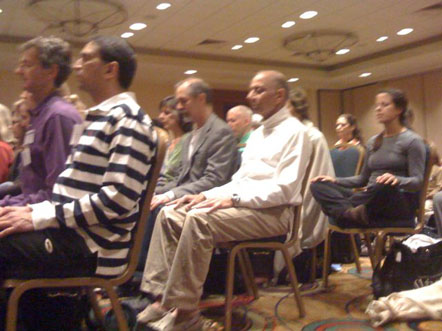 For his ending address to the Symposium of Yoga Therapy and Research, Swami Veda addressed the entire group, assembled in a huge hall. His subject was: "Yoga Spirituality and the Business of Yoga." He got quite conversational, told his story of coming to England from India, how attitudes toward money had affected him and his teaching,  how he managed to work in the world while at the same time how he stayed close to the truths that his family had raised him to represent.

"He remembered how he served Swami Rama, and how his own life experience demonstrates the reality of living as a Yogi in the world. It was an intimate story, one which all of us could identify with and understand", said Amy Gage. He inspired the audience with this simple question on stage to Veronica: "How many Yoga teachers are there in the entire world?" " Lots, let's say there are thousands. If we are doing our job right as Yoga teachers, we can change the world. Let's do it," he said.

The room became very quiet. People had tears in their eyes, from recognizing the reality of the mission in which all could participate, and the realization of how correct this is. If all the Yoga teachers in all the cultures around the world could really teach meditation and the loving of one other,  serving a greater good and paying attention to one other, well why not? We CAN change the world, and who knows, maybe we ARE changing it!

The SYTAR closed with Swami Veda leading the participants in a closing chant, a benediction to bless their work, and to celebrate Yoga in all our lives.

More powerful than a standing ovation was the feel of an audience with their hearts open, and total quiet and peace in the room. The conference ended in this ecstasy and mission. Let's change the world for the better.