Art Catalog „Kurt Arentz" for the exhibition at the museum

Photo documentation and bronzes of men and animals 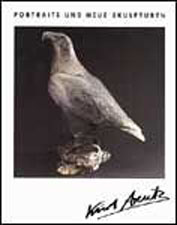 The bald-headed eagle is on the front cover of the catalog „Kurt Arentz". The model for it was an eagle from the wildlife preserve of Horst Niesters (Hellenthal, Germany). An exemplaire of this bronze eagle with the title „Liberty" belongs to the collection of the US President Ronald Reagan. A large bronze version can be seen in the Alexander Sculpture Garden in Clarence, New York.

Leverkusen/Köln/Nörvenich (bpb) The color art catalog „Portraits and new sculptures" by Kurt Arentz are available at the Museum of European Art at the Noervenich Castle. The exhibition continues till the end of September 2009, in honor of the artist who celebrated his 75th birthday this year.

The exhibition „Kurt Arentz" is open on weekends, Saturdays and Sundays, and on holidays from 12:30 pm to 7 pm. Guided tours for groups and schools during the week can be arranged by appointment, tel. 02426-4632.