Arno Breker would have had his 109th birthday in July 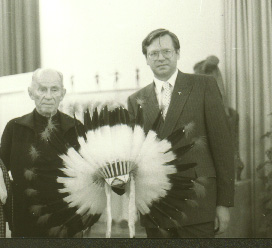 The sculptor Arno Breker (left) and the US publisher B. John Zavrel. He published several books about Breker, as well as by and about his contemporaries Prof. Hermann Oberth and Roger Peyrefitte (Paris). Breker valued Zavrel's engagement in the United States. In 1920s, Breker at one time considered settling down in New York.

New York/Berlin (mea) The 109th birthday anniversary of the famous sculptor Arno Breker on July 19, 2009 was remembered by many admirers of his work in Berlin, Paris and Rome. Members of the Arno Breker Society decorated photos of the master with flowers. In the Arno Breker Museum at the Noervenich Castle near Cologne, Germany, visitors were reminded about the anniversary on seeing Breker self-portrait bust in the entrance hall. On the day when Breker would have celebrated his 109th birthday, many visitors came to the museum from Belgium, Luxemburg and Netherlands.

In front of the bust was a colorful bouquet of roses. At the same time, the friendship of the 'Golden Triangle' of Salvador Dalí, Arno Breker and Ernst Fuchs was remembered. In Breker's honor, the flags of France, Germany and Europe were raised in the castle's courtyard. Arno Breker was a strong supporter of the French-German friendship, founded by Konrad Adenauer and Charles de Gaulle, as well as the transatlantic relations to the United States.

Arno Breker died on February 13, 1991. Today, 18 years after his death, come disturbuing news over the Atlantic to America. The Breker family and its new friends are in a dispute with teh Arno Breker Society. The widow Charlotte Breker has even started a lawsuit in Bonn against the Society and its chairman, Uwe Möller. And the expert on Breker, Uwe Moeller is the person, who was among the first ones to defend the artist after the war against defamation and political pressures. The widow now tries to remove this once good friend from the leadership of the Arno Breker Society. After a decades-long friendship, Mrs. Breker has ended this friendship. The 83-years old widow wants now to have more personal influence in the Society. The Arno Breker Society under the leadership of Möller, as well as the Arno Breker Museum at the Noervenich Castle are strong guardians of the memory of Arno Breker.