Kurt Arentz honored as „great artist of our time" 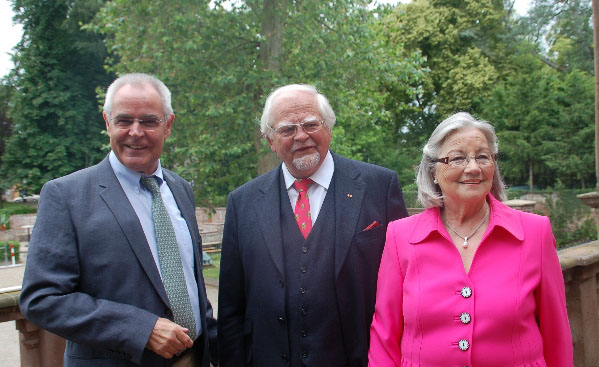 The historian Prof. Dr. Hermann Schäfer (left) delivered the laudatio for the sculptor Kurt Arentz at the celebration of the artist's 75th birthday. The former German Vice Minister of Culture of Angela Merkel appraised the life and work of the important contemporary artist. More than 300 guests from many countries came to the reception at the Noervenich Castle and congratulated Arentz (center) and his wife Therese.

Nörvenich/Leverkusen (bpb) On the occasion of his 75th birthday, the sculptor Kurt Arentz was honored as „great artist of our time" at a festive reception at the Museum of European Art at the Noervenich Castle near Cologne, Germany. More that 300 guests from Germany and countries of the European Union took part at the opening of the Exhibition of the Year honoring the artist. On display in the Museum are 140 objects: portrait busts of important personalities of our times, paintings, drawings and lithographs.

At the ceremony in the Knights Hall of the historical castle in the presence of the artist and his wife Therese, there was enthusiastic applause for the artist and his creative work. Prof. Dr. Hermann Schäfer (Berlin) appraised the life and work of the artist. The former German Minister of Culture under the Chancellor Angela Merkel praised, above all, the art of portraiture by Arentz. But also a special place in the total body work of the artist have his sculptures of animals. The painter Birgit Sewekow delivered the „Salute of Artists" honoring their successful colleague.

The President of the European Art Foundation Berlin, John G. Bodensein, proclaimed: „It is an honor and a pleasure for us to host this celebration under the patronage of the Foundation, and in this way once again bring back an international flavor to our region." Already before the event, there has been great interest in the exhibition at the castle. This included the preview of the exhibition by the US Ambassador in Germany. He arrived from Berlin to view the busts of Presidents Ronald Reagan and Bill Clinton, created by Kurt Arentz. The guests at the celebration in the Castle included, among others, the German Ambassador in Belgium, Prof. Dr. Reinhard Bettzüge, many artits and representatives from the areas of politics, society, church and art.

Congratulations from all over the world

Messages of congratulations for Arentz came from leading government officials in Berlin, as well as from the the Prime Minister of the State Nordrhein Westfallen, Jürgen Rüttgers and other state politicians. Messages of greetings came from the United States from politics, universities, Alexander Order pour le Merite and also from the former President George Bush Sr. from Kennebunkport.

A color exhibition catalog is available, which can be ordered from the museum at info@europaeische-kultur-stiftung.org or in the USA from info@meaus.com

An unusual gift was made by the composer Lajos Tar (Musica Humana). In honor of the artist, he composed a guitar composition „Hommage a Kurt Arentz." The world premiere took place in the presence of the illustious guests in the Knights Hall. The musical introduction was made by Patrick Bodenstein, a master student of Lajos Tar.

Special attention was given to the address of the Mayor Hans Jürgen Schüller. He arrived with Alois Thanner and the members of the traditional St. Sebastianus-Schützenbruderschaft, founded in 1408. The members came accompanied by musicans of other groups, in order to make „a beautiful surprise" for Arentz.

Guests from near and far have been richly treated with food and drink at the Castle. There was a selection of great wines from the German Wine Road (in the Rheinland-Pfalz area). Delicious fish and seafood from the North and East Seas were served by Gastro-Service Frank Arentz from Leverkusen. The cake came from the local bakery. Only the chanpagne for the toast came from abroad &endash from the next door neighbor, France.