OAG honors the author for her contributions to German-Jewish friendship 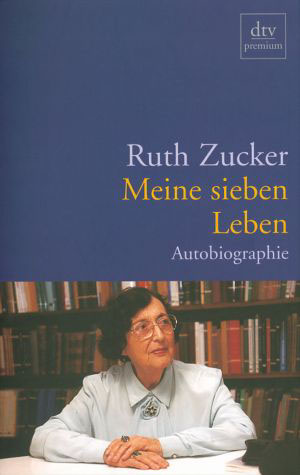 Ruth Zucker on the cover page of her autobiography „My Seven Lives". The book was published in the German language by the Verlag dtv, Munich ISBN-10 3423242299

Jerusalem/New York (mea) The author, psychologist and graphologist Ruth Zucker reached in Israel her 95th birthday. On this occasion, the European Art Foundation Berlin and the Alexander Order Pour le Mérite (OAG) honored the merits of the Israeli lady, who was born in Germany (Bonn) for the German-Jewish reconciliation.

The celebrant belongs, among others, to the founding members of the European Art Foundation and has over the years supported many artists from Israel.

In a „Message to the Knight", the Alexander Order has praised the lady as an example for private engagement for peace, understanding and reconciliation. "This concerns also the co-existence of Jews, who had comne and are still coming to Israel from many countries around the globe in order to found and maintain the State of Israel", according to the message of the OAG Grandmaster Dr. Wilson Greatbatch and the Chancellor B. John Zavrel (USA).

The president of the European Art Foundation, John Gilbert Bodenstein, had this to say: "For many years throughout your life, you have given positive impulses to our Foundation. In the matter of including the Judeo-Christian cultural traditions in our work, you were an experienced and wise advisor, whose ideas have been gratefully accepted".

A great surprise for Ruth Zucker were the friends who came personally to Haifa, Israel. The filmmaker from Berlin, Stephan Vogel with the author Jutta Vogel (media-event, Berlin) have travelled all the way to Israel, in order to spend some time with Ruth Zucker. The couple has been close friends with the author for decades, and so they know very well, what things the old lady likes to remember from her old homeland. "I have cooked for the the white asparagus, which I had brought for her from German, and make with it the Hollandaise sauce, which she likes so much", reports Jutta Vogel about the meeting of the old friends in Haifa.

(Congratulations to Ruth Zucker can be e-mailed to info@europaeische-kultur-stiftung.org . They will be passed on the Ruth Zucker in Israel).