His book about a love-friendship affait between two boys brought him defamation and fame. 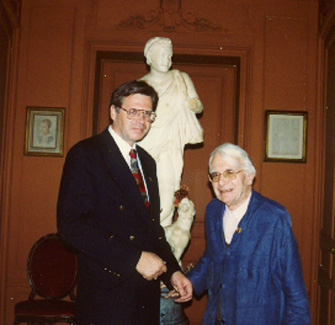 Paris/New York (mea) The French writer and diplomat Roger Peyrefitte, who died in the year 2000 in Paris, would have celebrated his 102nd birthday on August 17, 2009. The Alexander Order Pour le Mérite for Science and Art remembers once again on this day its former Grandmaster. In 1990, Peyrefitte had reformed the Alexander Order and proclaimed that also women should be accepted as members in the future. At the festivities at the Noervenich Castle near Cologne, Germany were also, among others, the Catholic theologian Prof. Dr. Uta Ranke-Heinemann, as well as the painter Pierre Peyrolle.

On the occasion of the birthday, the portrait-bust of Roger Peyrefitte was on display for three days at the Noervenich Castle, the seat of the Family Bodenstein. The bust was decorated with flowers and laurel wreath, according to the Greek tradition. It was in this place that Peyrefitte and Arno Breker had personally welcome at a reception in 1990 more than 1,400 guests from all over the world. The event took place in radiant summer weather.

On the 102nd birthday of this man, one has to consider that he went into the history of the 20th century as a attention-drawing personality. He provoked many disputes in the society, even scandals. He took on among others the Vatican and Marlene Dietrich, who had taken him to court because of his publicly expressed doubts about the lady's self-proclaimed activities as a resistance fighter against Hitler's Germany.

Roger Peyrefitte had caused one scandal about himself at the age of 25 years, when he first publishes his 'scandalous book' about a love-friendship between two boys in a Catholic boy's school. It brought him both fame and international recognition, as well as defamation and criticism. THis book was published in the spring of 2000, with a special foreword of the author, under the title "Special Friendships". At the same time, this was the last special edition authorized by Peyrefitte before his death.

The birthday of Roger Peyrefitte also give us the occasion to set straight certain matters about his political life. The accusations of his critics that Peyrefitte had collaborated with the Nazi Germany, have simply no basis. Such a collaboration would not have corresponded to the free spirit of the writers, who had broken many tabus in his lifetime. This is what Peyrefitte said about his friendships with men and women in Europe during the Second World War: "We were young and full of hope and friendship and peace. That was the motivation for our 'collaboration'. Our goal was Europe in peace and freedom. One of these proponents was also Jean Cocteau, my brother in Apollo".