Homage to the late Grandmaster of the Alexander Order 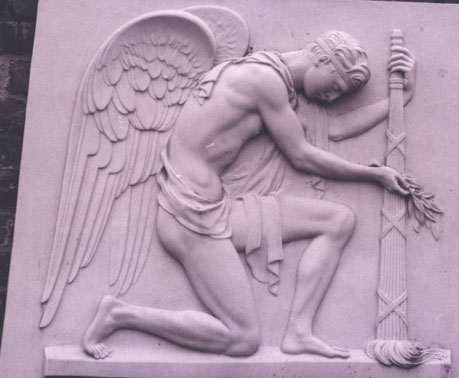 The Angel with a Torch. The French writer Roger Peyrefitte liked very much this relief, on display at www.museum-arno-breker-org . It shows a youth in the shape of a winged angel. The torch is his hand is a symbol of Life and Spirit.

Paris / New York (bpb) The admirers of the late author Roger Peyrefitte will mark on August 17, 2007 the 100th birthday anniversary of the great Frenchman. But he was not as old as his colleague Ernst Jünger, who lived to be 103 years old. The French writer died 'already' on November 5, 2000. Still, he reached the biblical age of 93 years. And Peyrefitte's lifelong artist friend Arno Breker barely reached the 91st year.

I write these lines in remembrance of the great cosmopolit, European and a friend of the arts: Roger Peyrefitte. And I write this as an homage to the Grandmaster of the Alexander Order Pour le Mérite for Science and Art. And his choice fell on me, to be called upon to serve this society of idealists as its Chancellor. What has bound together Peyrefitte, Arno Breker and Ernst Jünger in their individualities was the society of the Alexander Order as a guardian of good traditions in culture, art and sciences. The impulses, suggestions and advices, which I have received during my personal meetings with Ernst Jünger and Arno Breker in Europe, up to this day build the foundations for the work of the Order.

Scandal with Marlene Dietrich and the Pope

The literary work of Roger Peyrefitte contains many books. They are distinguished by a writing style which reveals a great knowledge of the author. The themes, which Peyrefitte writes about, connect the social issues and questions of the politics of culture with the current themes of the time. To the peculiar nature of the author belongs his ability to look through the key-hole not only into the intimate sphere of politicians, but also into their bedrooms. What he saw or perhaps even experienced there, he often transfered into critical literature, which often caused public scandals. In this way, Peyrefitte had to undergo a multimillion dollar lawsuit with the German Hollywood actress Marlene Dietrich. After the end of the war in 1945 she was celebrated by the victors as a resistance fighter, and was even named a Knight of the French Legion of Honor.

But Roger Peyrefitte saw this somewhat differently. Also "different" was his opinion already in 1930s about one of the ancient themes of mankind: the homosexuality. As a young French diplomat in Greece, he wrote his first successful book with the title „Les Amitiés particulières" (Secret Friendships), which appeared in 1944 in the famous publishing house Flammarion in Paris. The book describes a loving affection of two boys, ages 14 and 12, in a catholic school for boys.

Peyrefitte loved the United States. In his novel „Les Américains", published by Flammarion in1968, ("The Americans"), he has left his footprints for us in this way.

A special attention should be paid to the trilogy Alexander the Great, which was released as the first edition by the publisher Albin Michel in 1977. Before writing it, Peyrefitte undertook journeys of several months on the tracks of the young Alexander of Macedonia, across the Asia Minor, Persia and into India, in order to let himself be inspired at the original battle sites. This trilogy is of great value to the Alexander Order.

Toward the end of his life, Peyrefitte authorized an English edition of the „Les Amitiés particulières". This edition „from the final hand" was published with Peyrefitte's special dedication by West Art Publishers, USA.

The book illustrations were done with the agreement of the author by the British painter Hugo Haig-Thomas. 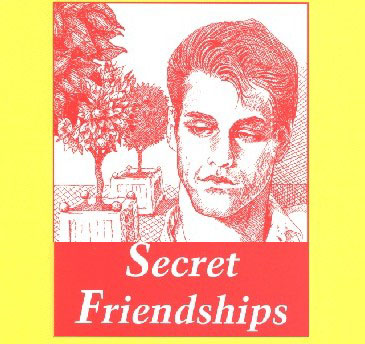 Front cover of the last publication of the bestseller „Secret Friendships", West-Art Publishers, New York. The book with illustrations by Hugo Haig-Thomas is dedicated to the Order Alexander the Great. You can order this rare book at info@meaus.com

For those who had been born after his death and for the young generation, this much needs still to be said about Roger Peyrefitte: he was a personality with these exemplary qualities. He was liberal, honest, critical, dependable and loyal. Furthermore, it is very interesting to experience his world of thoughts and his epoch by reading his books.

For his friends, Peyrefitte has risen to the Mount Olympus of the Gods, whom he had honored during his lifetime in so many ways. His friends know that today he is "on the other shore" and believe that he is united there also with other Knights of the Alexander Order, who had been his friends and acquaintances already during his lifetime: Salvador Dalí, Jean Cocteau, Peter Moore, Henry de Montherlant, Charles de Gaulle, Sir Peter Ustinov, Hermann Oberth, Fernand Mourlot and others.