The Engelbert Tunnel with Art and History 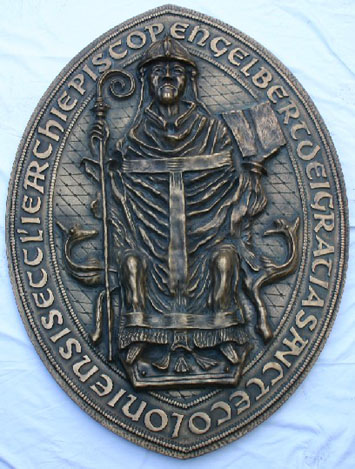 The bronze relief by Siegfried Lunau for the Engelbert Tunnel in Gevelsberg. The artwork has been created after the historical seal of the fromer Archbishop of Cologne and Imperial regent Count Engelbert.

Düsseldorf/Gevelsberg (bpb) The construction of the Engelbert Tunnel in Gevelsberg is a good example, how in the year 2007 modern technology can be combined with art and history. The tunnel, which is more than 550 yards long, is named after the Archbishop of Cologne, the Count Engelbert von Berg (1185-1225). The decision-making panel acted on the recommendation of the local historian Dr. Margret Korn. The founding father of the town was just this unusual man of the cloth.

In a good tradition, the sculptor Siegfried W. Lunau received the commission to create the relief for the modern engineering project. The center piece is a bronze relief, about 4 feet diameter, in the form of the seal of the Archbishop Engelbert. To this are added a number of coat-of-arms cartouches with historical symbols and insignia. The sculptor designed and created even the letters by hand. That this cycle of reliefs has come to decorate the entrance to the tunnel, one has to thank above all Dr. Margret Korn. She not only supported the project from the beginning, but she is also a patron.

The European Art Foundation Berlin (EKS) praised the Mayor Claus Jacobi (SPD) in a letter, in which they expressed their appreciation that the decision-making panel for the decoration of the entrance to the tunnel had decided in favor of a sculptor from the area. "Siegfried Lunau is an acknowledged artist of the classical tradition. His bronze works not only bring honor to the city, but also the citizens will like them", said the EKS President, John G. Bodenstein.

The sculptor Lunau says about his reliefs: "I was pleased to undertake this work, because with this modern transportation project is written a new piece of history of the town Gevelsberg". This town has a fascinating history, recalls Lunau. "The founding goes back to around the year 1,000 AD. If now, in the year 2007 the town and its citizens combine the completion of this engineering project with thoughts about our ancestors, then this is a very praiseworthy and exemplary conduct." 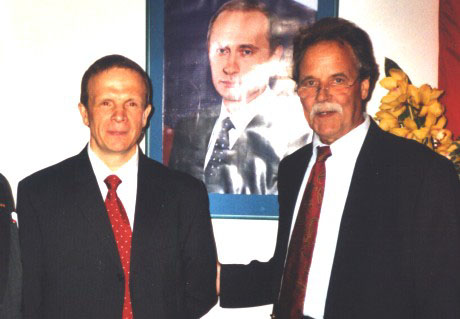 The sculptor Siegfried W. Lunau (right) with the Russian diplomat Alexander Stankevich (Moscow) in the Museum Europäische Kunst at the Nörvenich Castle near Cologne. The cultural event was arranged in cooperation with the European Art Foundation (EKS) Berlin.

Actually, the founding of Gevelsberg goes back to the Archbishop of Cologne, and former Imperial Regent Count Engelbert. The town grew out of the previous farming estate Mylinghausen. It is mentioned as "Milinchusen" in a written document dated December 13, 1096. It says there that the Bishop of Cologne had transferred, among others, the ownership of a farm estate in Mylinghausen to the cloister of Siegburg. In 1897 the Mylinghause farm estate was officially renamed to Gevelsberg. On February 1, 1886 Gevelsberg was awarded the rights and privileges of a town, after it had fullfilled the conditions set by Kaiser Wilhelm I, the King of Prussia.

Worshipped as a saint after a sad end

The life and work of the Archbishop Engelbert came to a sad end. On November 7, 1225 he was killed on his return journey from Soest to Cologne by the followers of Count Friedrich von Isenberg. The historical research does not have a definitive answer whether the Archbishop was originally meant only to be taken hostage, or if his killing had been intended all along as an act of revenge. Count Friedrich II, as well as other nobles from Westphalia and Rhineland were opposed to Engelbert, who wanted to keep increasing and increasing his power.

Soon after his tragic death, people started to worship his memory if he were a saint, although the Archbishop had never been made officially a saint by Rome. The religious cult led to the cutting up of his body into so-called relics. Thus, the "heart of the Saint" is kept in the Cathedral of Altenberg. A "finger" is treasured in the Catholic parish of St. Engelbert in Solingen. A fragment of his forearm is kept in the former St. Engelbert Church in Gevelsberg.