Pope Benedict XVI and Swami Rama together in a Christian Church 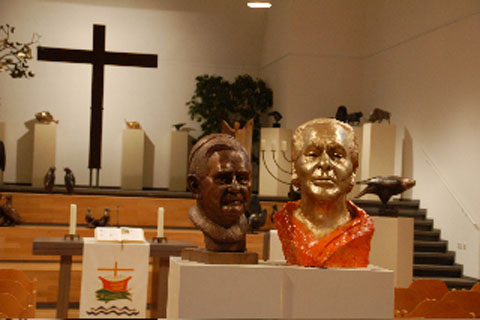 Bust of the Pope Benedict XVI and the late Swami Rama of the Himalayas from India draw much attention in an art exhibition. The Christus Kirche in Leverkusen (Germany) hosted the show.

Berlin / Leverkusen (bpb) The impressive portraits of Pope Benedict XVI. and the late Indian philosopher Swami Rama of the Himalayas (1925-1996) are standing peacefully together in a Christian Church at Leverkusen (Germany). Both busts, created by the sculptor Kurt Arentz, are a big attraction of the art exhibition in the "Christus Kirche" (Church of Christ) in this famous city in the historical Rhine valley. Father Dr. Detlef Proessdorf, chief of this German Protestant Church in the Rhineland, hosted the exhibition. "We support the dialog between the religions", the father said. "Our intention is to share common goals and serve the peace in the world."

The main religion in Germany is Christianity. The Christian society is divided in two parts: the Roman Catholics under the central administration of the Vatican, and the Evangelical Church in Germany (EKD). This so-called Protestant church is the institutional form chosen by a community of 23 Lutheran, Reformed and United regional churches.

German Protestant church structures are based on federal principles at all levels. Each local congregation is responsible for Christian life in its own area. Each regional church has its own special characteristics and retains its independence. Without in any way diminishing this autonomy, the EKD carries out joint tasks with which its members have entrusted it. The EKD has the following governing bodies, all organized and elected on democratic lines: the Synod, the Council, and the Church Conference. They are responsible for fulfilling the EKD's tasks as laid down in the Constitution of the EKD.

Dialog of the great religions

"Showing the bust of the Catholic Holy Father and the portrait of the Indian Holy Swami Rama of the Himalayas tells us about the readiness of the cosmopolitical cooperation in spiritual fields", said Marco J. Bodenstein. He is the Curator of the European Art Foundation. "No doubt, the Western society can learn a lot from the spiritual world of the Orient." The philosophy of Buddhism and Hinduism, as well as of Judaism, finds more and more interest among the people in Germany.

The portrait of Swami Rama in a Christian Church brings new attention to this religious leader. He was born as Brij Kishore Dhasmana, to a Northern Indian Brahmin family. He became lineage holder of the Sankhya Yoga tradition of the Himalayan Masters. He was raised in the Himalayas by his master, Bengali Baba. Under the guidance of his Master he traveled from monastery to monastery and studied with a variety of Himalayan saints and sages, including his grandmaster who lived in a remote region of Tibet. From 1949 to 1952, he held the prestigious position of Shankaracharya of Karvirpitham in South India. After returning to Bengali Baba in 1952 and many years of further practice in the Himalayan caves, Swami Rama was sent by his teacher to the West, where he spent a effective time of teaching, especially in the United States of America.

He was the founder of the Himalayan Institute of Yoga Science and Philosophy which has its headquarters in Delhi and branches in the United States, Europe and India. Swami Rama also founded other teaching and service organizations. He authored a number of popular books during his life, in which he describes the path he took toward becoming a yogi and lays out the philosophy and benefits behind practices such as meditation.

It is reported: on the evening of November 13, 1996, Swami Rama was in his apartment on the campus of the Himalayan Institute Hospital near Dehra Dun and Rishikesh (India). Shortly after 11:00 pm, he consciously dropped the body, entering into Mahasamadhi.