Bill Clinton in Buffalo: „There are two kinds of voters in 2008"

Consul B. John Zavrel, director of the Museum of European Art discusses future projects of the Museum with with the former US President Bill Clinton.

Buffalo, NY (meaus) „In this election, there are basically two kinds of voters in 2008", said the former President Bill Clinton at a reception in downtown Buffalo on Sunday, January 20, 2008.

He went on to explain what he meant. The two kinds of voters are:

1) those who are issue-oriented and want to elect a president to run the country like a CEO, or

2) those who vote for a personality that makes them feel good about themselves and gives them hopes and promises.

Those in the first group, who want to elect a president, are mainly attracted to Hillary Clinton and John Edwards. Those with low-paying jobs, students, young people, older women and retirees constitute the bulk of these people. They face unemployment, no health insurance, low social security benefits, high tuition, problems paying their mortgages and credit cards, food and gas. These are the people who need help, and who look to a strong and capable president to help them solve some of the problems which they themselves cannot overcome.

Those in the second group, are to a large extent people who are relatively better off, who have their job, their insurance, and so on, but who want to elect somebody to make them feel good about themselves, make them „inspired". These people are largely drawn to Barack Obama. He does not have much to show as impressive accomplishments during his short time in the US Senate, and his message has been more general than specific. Hillary Clintons proven record of her and Bill Clinton's achievements over the past 35 years are much more impressive then vague words and hopes of Obama.

And this is the basic problem which Barack Obama is facing. After the initial and not quite genuine success in Iowa, it is becoming visible that his voter base just isn't wide enough to make him a serious candidate in the general elections in November. For this reason, we will continue to see the current trend of all kinds of accusations of „unfair play" against the Clintons (both of them), in order to distract the voters and direct the discussions away from the serious, specific issues facing the country today.

And this is exactly what happened during the latest CNN debate of the Democratic presidential candidates in South Carolina. Barack Obama spent most of the time bickering against Hillary (and against Bill Clinton for actively helping her campaign), and Hillary arguing back and pointing out the unfair things Obama said or did against them. Both wasting valuable time and not talking about the serious issues that need to be discussed, as John Edwards correctly pointed out after one heated and prolonged exchange. 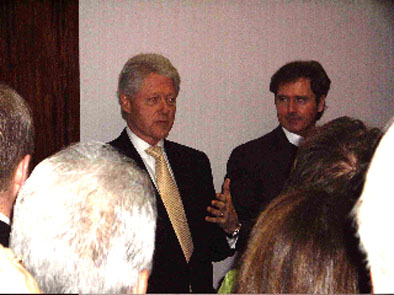 Bill Clinton talks about the recent Democratic primaries in New Hampshire and Nevada to some 200 supporters at a fundraising event in Buffalo on January 20, 2008. With the former US president is the popular Buffalo politician, Brian Higgins.

Regrettably, so far John Edwards has not done as well as he could have, partly due to the fact that the media concentrates their attention almost exclusively on Hillary Clinton and Obama, day by day blowing their comments out of proportion and staging an entertainment circus for their TV audience. So, the urgent and serious issues which are championed by John Edwards have been largely ignored in the TV debates, rather poorly moderated by CNN's Wolf Blitzer. He has not been able--or willing--to keep the debates centered on the real issues. And that is a great loss.

Should John Edwards drop out of the presidential races at some point, it is likely that it would be Hillary Clinton who would benefit most, since both she and Edwards attract the same kind of voters: those who have urgent and serious needs, and who need a president who has the experience, clear vision and the inner strength to accomplish the things that need to be done to put America back on the right track, after the seven years of the disastrous Bush-Cheney administration. And it is the calm, composed and experienced Hillary who will ultimately have their confidence and their votes.