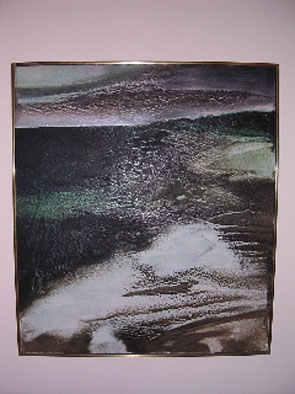 "Heavy Light", a painting by Frederick Kline. January 11, 2008 is the 30th anniversary of the artist's premature death.

San Francisco/New York (meaus) November 13, 1977: The artist Frederick Joseph Kline celebrated his 53rd birthday at the house he built himself on Neahkahnie Mountain hovering over the Pacific on the Oregon coast. It was a great party with family and community. All rejoiced, unaware that he had less than two months left to live.

Frederick Kline called himself a "mystical landscape painter". Nature was his primary fascination, comfort, inspiration, instrument as well as medium. His education developed his innate talent as an artist. He earned a Bachelor of Arts in Painting at Bowling Green University in Ohio, a Master's of Fine Arts in Painting, and a Master's in Art Education, from Iowa State University.

During World War II, he served in the US Navy. In the Korean war, he served as a medic with the Marines. As a result of an accident in Korea, he was hospitalized at the Military Hospital in Seoul. During the Korean War, he experienced profound inspiration from the beauty of the country, the spiritual philosophy and arts, all of which were in contrast to the brutality of war. It was during his recuperation from a near fatal accident that he honed his spiritual strength and transcended the limitations of pain. He realized that there existed a greater force, attainable to a seeker through faith and practice.

In 1950s, he learned meditation from a doctor, who taught him how to practice "self hypnosis". Fred would sit in stillness and silence, pay attention to the flow of his breath, and prepare himself to be a vessel of creativity, letting his mind become quiet from the ordinary din. From a state of stillness, and out of that inner silence, he would approach a canvas, allow the brush to move as it wanted, and what resulted was the artifact of his "cosmic mind", as he called it. His interest was to be an agent with no preconceived idea of the final product. For him, the PROCESS of painting was the object, and he was not attached to the outcome, or the final result.

His young wife Amy recalled the event during the last days of the artist's life, at the beginning of 1978 in Oregon:

"... then came a perfect Christmas, New Year's and then Fred's return over the Oregon Coast Range blizzard roads, to Portland State University, where he was professor of art. He arrived safe and sound, held classes and office hours, played handball winning the championship with his team, congratulations all around. Then off to see Vy Asimov, his Greek "sister" (they shared the same birthday, she was ten years his senior) and owner of the Leaky Roof Tavern in Portland, Oregon. He ordered his "regular": a hamburger burned. She left, soon to return with his dinner. In the meantime, Fred had disappeared. Then a woman came in with a dog, saying, "Hey, there's a guy in his car with his brights on, radio full blast-- he's asleep and won't wake up".

We got a call 11th of January, 1978.  It was 12:13 a.m. when the phone rang. Laura and I heard this together, she was 14, two year old Grace was asleep, and I was pregnant with Eli, Fred already had named him. From 100 miles away in the big blank frozen city, with a dismembered voice saying cold things about a medical examiner with news, and finally, when I asked where my husband was-- I was already planning to bundle the girls in lots of blankets, be careful in a rush over the icy mountain range, realizing I would bank the fire, we'd be back in the daylight with Fred, and stoke it up again then--and the fellow said no, not to bother to drive over, because Fred was dead. Heart attack, coronary artery disease, atrial fibrillation, cardiac arrest--dead."

A gifted artist, Frederick Kline explained one of his favorite themes, the shoreline of the sea as life building up, depositing, taking away and shifting around. He called it the reminder of the inevitability of life and death. It shows up in most of his paintings. He developed techniques with acrylic paints, capturing the patterns at the edge of the earth and the tip of the tide, as they move from dense to light, particulate to wave, gravity to ascendence. Often the canvases had heavy sand on them, which he affixed with acrylic medium which he used to purchase by the gallon from paint stores.