Barack Obama speech in front of 200,000 people in Berlin

A big show at a historical place in Germany 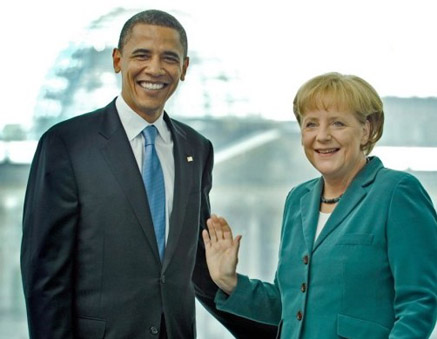 German Chancellor Angela Merkel welcomes Barack Obama in the Chancellery Berlin. After a short meeting and this official photograph, the Chancellor left the capital for summer vacation.

Berlin/Washington (bpb) Barack Obama's trip to Asia and Europe was a big success for all of his followers. The main attraction was his speech to 200,000 people at the historical "Siegessäule" in West Berlin. This monument was set up at this place on the advice of Adolf Hitler 70 years ago . Originally, Obama wanted to speak in front of the "Brandenburg Gate", known from the fascinating declaration by President Ronald Reagan. But the German Chancellor Angelika Merkel refused this idea. This historical place should not be used for public relations of a US presidential candidate. Most Germans agreed with this opinion.

Obama spoke in English. Unfortunately, abut 90 percent of the audience did not understand what he said, since they did not speak English. By the way: Berlin has 3,5 million inhabitants. Most of the 200,000 people at the event were under 30 years. Before his speech on July 24, 2008 in Berlin, Obama visited Angela Merkel in the Chancellery, later, he met with the German Minister of Foreign Affairs, the SPD politician Werner Steinmeier. 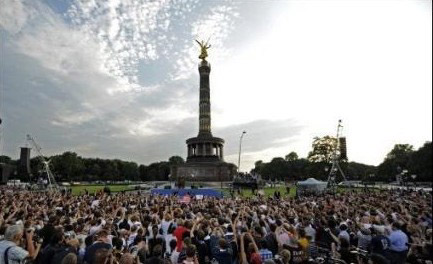 Speech in the evening sun in Berlin. View of the crowd listening to Barack Obama In Berlin.

When Obama began on this day his speech in the evening sun of Berlin, Chancellor Merkel has already left the capital for her summer vacation. Berliners were thrilled and gave a lot of applause. But in general, Germany's leaders in all states felt a bit uneasy about the candidate's election campaign event on German territory.

Shortly after Obama left Berlin, it was clear to most of the Germans. The US Candidate is not only the "sonny boy" in the crowd. He has visions and requests to the allies. Politicians recognized: if Obama becomes the next US President, he will ask all European allies for more money to support the global US policy. And especially Germany.

1. Obama wants more European aid for the war against Afghanistan. "America cannot do this alone," he said. Afghanistan needs the US and the European soldiers, he said.

2. The presidential candidate expects additional European support in Iraq: "The whole world should support the millions of Iraqis who seek to rebuild their lives, even as we pass the responsibility to the Iraqi government, and finally bring this war to a close."

3. Greater engagements and participation of the Europeans in the permanent war on terror. "If we could create NATO to face down the Soviet Union, we can join in a new and global partnership to dismantle the networks that have struck in Madrid and Amman; in London and Bali; in Washington and New York."

The event in Berlin was nearly fully arranged by Obama's handlers, who came from the United States and several European countries. Beside the security service of the German Police and Secret Service, Obama had his own body guards. After the speech, only selected journalists from US Medias were invited for short interviews. Members of the foreign press in Germany were explicitly not welcome. The target audience was America. Obama said on his trip what he had already declared a hundred times during his election campaign in the United States. The informed German audience knows the difference between promises of politicians, and what they are later willing and able to realize. 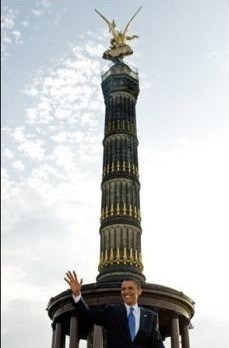 Barack Obama in front of the historical 'Victory Column' in Berlin.

The Brandenburg Gate only for great historical events

Barack Obama had to learn in Berlin that Germany will not do all what he wants. Most of the Germans were against a speech by Obama at the Brandenburg Gate.

This has been used only by several American presidents in the past. In 1987, then US President Ronald Reagan made a famous appearance in front of the landmark, which was still cut off by the Wall at that time. In his speech, Reagan called on the Soviet leader Mikhail Gorbachev to "tear down this wall."

The former US President Bill Clinton also appeared at the gate in 1994, ending his speech with the words "Berlin ist frei," or "Berlin is free." The last former US president to speak in front of the gate was George Bush, Sr., who inaugurated the new US embassy on July 4, 2008. This building sits next to the gate. US President John F. Kennedy's famous "Ich bin ein Berliner" speech on the other hand took place at the Schoeneberg City Hall, which was the seat of the Berlin Mayor before the reunification of Berlin.