The Beginnig of a Great Journey

"Midway in our life's journey, I went astray from the straight road and woke to find myself alone in a dark forest." So begins 'The Divine Comedy' of the great Italian poet Dante Alighieri.

It is a Christian allegory, with which the Western civilization has tried to unlock the mystery of its identity. In INFERNO, the first part of the trilogy, Dante is conducted by the spirit of the ancient poet Virgil through the nine circles of Hell on the first stage of his long journey toward God.

Dante travels the universe from end to end, from his personal contact with the hairy sides of Satan to his final ecstatic vision of God. He maps the physical and moral geography of that universe. He evaluates everything in the universe within a single system of values. For him, the universe was a sphere of which Satan was the center and God the circumference. 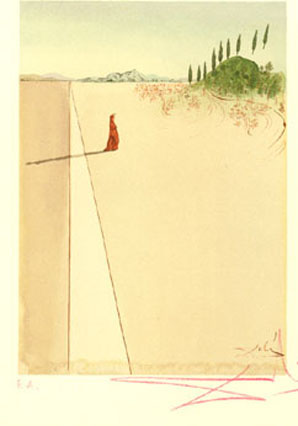 "The Beginning of a Great Journey", # 1 of 33 of a series of color woodcuts by Salvador Dalí.

(1) Dante himself was born in 1265. He started writing the poem at the age of 35, in the year 1300. The poem opens with the words 'Midway in our life's journey", and he means it literally. It is half of the biblically allotted life span of seventy years. And the journey begins at dawn on Good Friday.

The knowledge that one is lost is the beginning of finding one's way. In that knowledge, Dante looks up, and sees the first rays of dawn on the shoulders of a small hill. Sun is the symbol of God as Divine Illumination, and Dante yearns for that light. He races up the hill toward it. But God cannot be reached so easily… Dante's way is blocked by three beasts of worldliness, who symbolize the three divisions of Hell:

a She-Wolf, the Upper Hell (sins of incontinence),

a Lion, Middle Hell (sins of violence and ambition), and

a Leopard, the Lower Hell (the sins of malice and fraud).

Forced back into the darkness by these three beasts, Dante discovers the figure of Virgil, a symbol of human reason. His task is to show Dante the foolishness of his behavior. Dante must go a more difficult way. He must make the perilous descent to the bottom of Hell, to the recognition of the true nature of sin. He must then make the difficult climb of the Mount of Purgatory, to the total renunciation of sin. Only then, after a great effort, can the soul be ready to approach God.

Virgil offers to guide Dante, but only as far as human reason can go. Another guide, Beatrice&emdashsymbol of divine love&emdashmust take over for the final ascent. Dante agrees, and they start the long journey.

(2) It is the evening of the first day, Good Friday. Dante is following Virgil and finds himself tired and despairing. To comfort him, Virgil explains how Beatrice came to him to send him to help Dante on his journey. Now Dante understands that with the help of heavenly powers he cannot fail, and his spirit rises with anticipation.

(3) The poets Dante and Vergil pass the Gate of Hell and are immediately overwhelmed by cries of anguish. Dante sees the first souls in torment. They are the OPPORTUNISTS, those souls who in life were neither for good nor evil, but only for themselves.

The law of Dante's Hell is the law of symbolic retribution. As they sinned, so they are punished. They took no sides, therefore they are given no place. As their sin was darkness, they now move in darkness. As their own guilty consciousness pursued them, so they are now pursued by swarms of wasps and hornets.

They move on to Acheron, the first of several rivers of Hell. Here, the newly arrived souls of the damned gather and wait for the monstrous Charon to ferry them over to punishment. Charon recognizes Dante as a living man and refuses him passage, but Virgil forces him to serve them. Dante faints with terror, and does not reawaken until they reach the other side.

(4) Dante wakes to find himself across Acheron. They are now on the brink of Hell itself, which Dante conceives as a great, funnel-shaped cave lying below the northern hemisphere, with its bottom at the earth's center. Around this great circular depression runs a series of ledges, each of which Dante calls a Circle. Each circle is assigned to the punishment of one category of sin.

The poets begins to cross the First Circle. Here they find the VIRTUOUS PAGANS. They were born without the light of Christ's revelation. Their only pain is that they have no hope. This is also Virgil's eternal place in Hell. Here are also the great poets of all time&emdashHomer, Horace, Ovid, and Lucan. Together with these poets, they all enter the Citadel of Human Reason. Dante sees the Master Souls of pagan antiquity all gathered on grass, illuminated by the radiance of Human Reason. This is the highest state that man can achieve without God, and the glory of it dazzles Dante. But he knows that it is nothing compared to the glory of God. 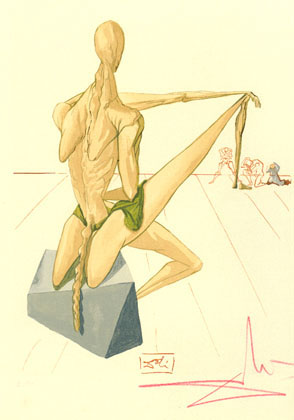 (5) The poets Virgil and Dante leave Limbo and enter the Second Circle. Here begin the torments of Hell proper. Here, blocking the way, sits Minos, the semi-bestial judge of the damned. He assigns to each soul its eternal torment. He orders the poets back, but Virgil silences him, and the poets move on.

They find themselves on a dark ledge swept by a great whirlwind, which spins within it the souls of the CARNAL, those who betrayed reason to their appetites. Their sin was to abandon themselves to the tempest of their passions. Here Dante sees Cleopatra, Helen, Achilles, Paris, Tristan, as well as Paolo and Francesca. The couple tells Dante their story, and he is so stricken by compassion that he faints once again.