Dante flies on the back of the monster Geryon 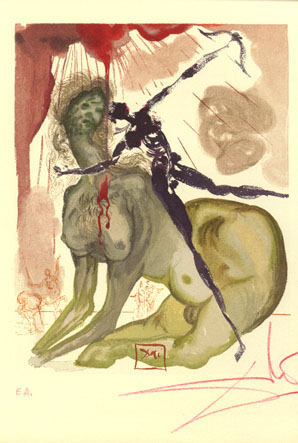 'THE MINOTAUR', woodcut # 12 by Salvador Dalí illustrates PART 3 of the six-part series on Dante's INFERNO.

(12) The poets beging their descent of the fallen rock wall and meet the Minotaur. Virgil tricks him, and they hurry past him.

Below them they see the River of Blood. Here are punished the VIOLENT AGAINST THEIR NEIGHBORS&emdashthe great war-makers and cruel tyrants. They all shed blood of their fellowmen. And now they are immersed in the boiling blood forever, according to the degree of their guilt.

Next, the poets are challenged by the Centaurs, but Virgil manages to win safe conduct from Chiron, their chief, who assigns Nessus to guide them and help them across the river.

(13) Nessus carries them across the river of boiling blood, and leaves them in the next circle, THE WOOD OF THE SUICIDES. Here are punished those who destroyed their own lives.

These souls are encased in thorny trees, whose leaves are eaten by the odious Harpies. When the Harpies feed upon them, the wounds bleed. The are permitted to speak only as long as the blood flows. Thus, those who destroyed their bodies are denied a human form. And just as the supreme expression of their lives was self-destruction, so they are permitted to speak only through that which tears and destroys them. 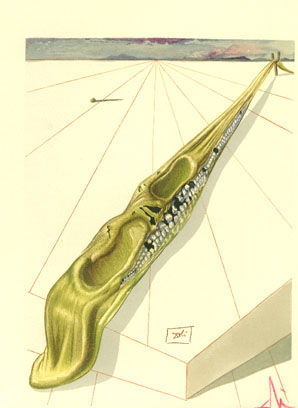 'THE BLASPHEMERS', woodcut # 14 by Salvador Dalí illustrates PART 3 of the six-part series on Dante's INFERNO.

They continue along the edge of the Wood of the Suicides, and come to a blood-red rill which flows boiling from the Wood and crosses the burning plain. Virgil explains the miraculous power of its waters and the origin of all the rivers of Hell.

(15) Protected by the marvelous powers of the boiling rill, the poets walk along its banks across the burning plain. The Great Cliff, at whose foot lies the Eighth Circle, is before them.

They pass one of the roving bands of SODOMITES. One of them stops Dante, and he recognizes him. He was a dear friend of his and a writer who had considerably influenced Dante's own development. Dante addresses him with great and sorrowful affection, paying him the highest tribute offered to any sinner in the Inferno.

(16) The poets arrive within hearing of the waterfall that plunges over the Great Cliff into the Eighth Circle. Three wraiths, recognizing Dante's Florentine dress, come running toward him to ask news of Florence. Dante replies, and they return to their bands. The Poets continue to the top of the falls. Here, Dante is instructed to remove a cord from around his waist, and Virgil drops it over the edge of the abyss. Immediately, a great, distorted shape comes swimming up through the dirty air of the pit.

(17) The monstrous shape lands along the brink, and Virgil salutes it. It is Geryon, the Monster of Fraud. Virgil announces that they must fly down from the cliff on the back of this monster. While Virgil negotiates for their passage, Dante is sent to examine the USURERS (The Violent against Art).

These sinners sit in a crouch along the edge of the burning plain. Each of them has a leather purse around his neck. Their eyes, gushing with tears, are forever fixed on these purses.

Then Dante re-joins Virgil, and mounted on the back of Geryon, they fly down from the great cliff. Their flight carries them from the Hell of the Violent and the Bestial down into the Hell of the Fraudulent and Malicious.

(18) Having dismounted from Geryon, the poets find themselves in the Eighth Circle. It is the upper half of the Hell of the Fraudulent and Malicious. It is a great circle of stone, which slopes down like an amphitheater. The slopes are divided into ten concentric ditches. And within these ditches, each with his own kind, are punished those guilty of Simple Fraud.

The poets go toward the first ditch, and come to the first group of sinners, the PANDERERS and SEDUCERS. They make two files, one on each side of the ditch, and are driven at an endless fast walk by horned demons, who hurry them along with great lashes. In life, they goaded others on to serve their own foul purposes; so in Hell they are driven in their turn.