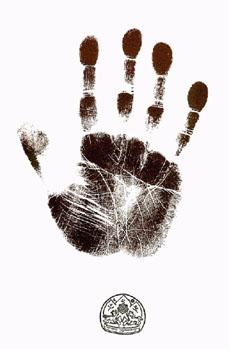 The hand of H.H. the Dalai Lama. A lithograph of the right hand of the Buddhist leader.

Buffalo/New York (meap) As a special feature of the exhibition "TIBET: THE LAND & ITS PEOPLE, the Museum of European Art is showing for the first time an original print of the right hand of the Dalai Lama. This precious document belongs to the 'Eleanor & Wilson Greatbatch Collection' at the Museum of European Art in Clarence, New York. It is the only hand print, which the Dalai Lama allowed to be taken during his life.

The initiative for the print of the hand came from the publicist Joe F. Bodenstein. He was one of the first Westeners to seek out His Holiness the 14th Dalai Lama in 1960 in his exile in Dharamsala (North India), and has supported the demands for freedom and peace for Tibet. The first audience with then the 25-year old God King took place in a mountain residence, where he was being protected by a large number of heavily armed Indian soldiers from a possible attack by Chinese kidnapping commandos. It was only short time since his escape to India.

He survived the uprising of the Tibetan people against the Chinese occupation, which took place on March 10, 1959. According to historical sources, some 90,000 Tibetans lost their lives within a year in this last effort to resist the invaders. The Dalai Lama and with him tens of thousands of Tibetans were forced to escape across the Himalayas to India.

In the decades that followed, the Dalai Lama has become a "Pilgrim for Peace." His dialog with Christians and with the Catholic Church in Rome, as well as his meetings with leading statesmen, above from the Western world, has brought to the consciousness of the general public, what Buddhism actually means in practice. 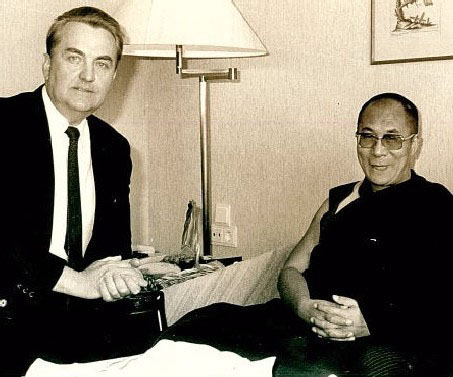 H.H. the Dalai Lama (right) in conversation with Joe F. Bodenstein. In foreground is the white cloth for cleaning the hands after the taking of the hand prints.

The openness toward the world of H.H. the Dalai Lama led also to his agreement for the taking of the print of his hand. It belongs to a collection of prominent hands, as for instance Marc Chagall, Pablo Picasso, Salvador Dali, Arno Breker, Jean Miro, Jean Cocteau, Ernst Jünger, Justus Frantz, Swami Veda and Wilson Greatbatch.

From the hand print of the hand of the Dalai Lama, a limited number of lithographs was made in the studio of Fernand Mourlot in Paris. Exemplairs of this edition can be found among others in the collection of the Tibet Museum in Switzerland and in the Museum Europaeische Kunst at the Noervenich Castle in Germany.

The graphic work with the hand print in original size has format of 30 x 19 cm. Paper is French heavy paper. Color: dark brown, like the Tibetan sandstone. Each graphic is stamped with the official seal of the Dalai Lama. Collectors and museums can order one exemplaire of this lithographs. For more information, please write to: zavrel@meaus.com