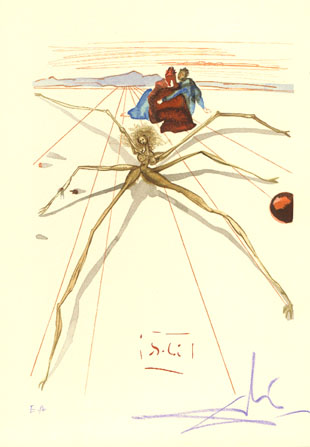 'LEAVING THE WRATHFUL BEHIND', woodcut # 51 by Salvador Dalí. The viewer of this picture illustrating Stanza # 17 is captivated by the Woman-Spider. Dalí goes for inspiration to the Ancient Greece, the myth of Arachne, which means "spider". She was turned into a spider-woman by Athena, and now must continually spin the web.

(13) The Poets reach the Second Cornice and find the blue-black rock unadorned by carvings. As they walk on, Dante hears voices crying out examples of great love for others (Caritas), the virtue opposed to Envy. A short way beyond, Dante comes upon the souls of the Envious and describes their punishment. They offended with their eyes, envying all the good they saw of others, and therefore their eyes are wired shut. So blinded, they sit supporting one another, as they never did in life, and all of them lean for support against the blue-black cliff (God's decree). Among them Dante encounters Sapia of Siena, and has her relate her story.

(14) Dante's conversation with her is overheard by two spirits, who sit side by side against the inner cliff-face. Dante enters into conversation with them, hears their prophesies and their lament for the past glories of Romagna as compared to its present degeneracy. As they move on, Dante is struck with terror by two bodiless voices that break upon them like thunder. The voices are the Rein of Envy. The first is the Voice of Cain, lamenting that he is forever cut off from mankind.

(15) It is now 3:00 p.m. and the Poets are walking straight into the sun, when an even greater radiance blinds Dante, and he finds himself in the presence of the Angel of Caritas, who passes the Poets on to the ledge above. As soon as the poets enter the Third Cornice, Dante is entranced by the Three Visions that constitute the Whip of Wrath, extolling the virtue of Meekness toward kin, toward friends, and toward enemies. These events take three hours. It is, therefore, 6:00 p.m. of the second day in Purgatory when the Poets, moving forward, observe an enormous cloud of smoke ahead of them.

(16) The poets enter the acrid and blinding smike in which the Wrathful suffer their purification. As Wrath is a corrosive state of the spirit, so the smoke stings and smarts. As Wrath obscures the true light of God, so the smoke plunges all into darkness. Marco Lombardo hears Dante speak, and calls to him. He accompanies the Poets to the edge of the smoke, discussing with them the causes of the modern world's corruption. As he finishes his talk, a light begins to appear through the smoke. Marco explains that it is the radiance of the Angel who waits ahead.

(17) The Poets emerge from the smoke, and Dante is struck by the visions that make up the Rein of Wrath. When he emerges from his trance, he hears the Angel of Meekness calling him to show him the ascent, and the Poets mount at once as the Beatitude, Blessed are the Peacemakers, is sounded behind them. They reach the top of the Ascent just as night falls, and though they might normally continue along the level way, Dante feels his body so weighed down that he has to pause and rest. As the Poets rest, Virgil gives Dante a discourse on Love, demonstrating to him that all actions spring from either Natural Love or Spiritual Love, and that it is the various perversions of Love that lead to the sins that are punished in Purgatory. 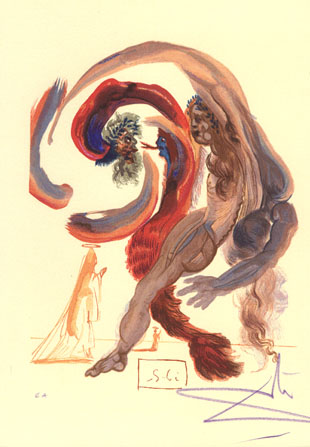 'THE FOURTH CIRCLE OF PURGATORY', woodcut # 52 by Salvador Dalí. This composition for stanza # 18 is often interpreted as a 'dance". Dalí was inspired by Dante's text of Stanza # 18, describing a large group of souls madly running and shouting. This image is conveyed by Dalí by showing four whirling spirits, as if in a spinning circle.

(18) Virgil continues his discourse on Love, explaining the relation of Love and Free Will, but warns Dante that Reason is limited. Dante must seek the final answer from Beatrice, for the question involves one of the mysteries of faith. It is near midnight when Virgil concludes, and Dante is starting to drowse. Sudenly, he is brought awake by a long train of souls who come running and shouting from around the mountain. The are the Slothful, the souls of those who recognized the Good, but were not dilligent in pursuit of it. As once they delayed, so now they are all hurry and zeal, and will not even pause to speak to the Poets. Eventually, all these souls pass from sight and hearing. Dante, his head full of confused thoughts, sinks into sleep. Instantly, his thoughts are transformed into a dream.