Dante and Beatrice in the Earthly Paradise 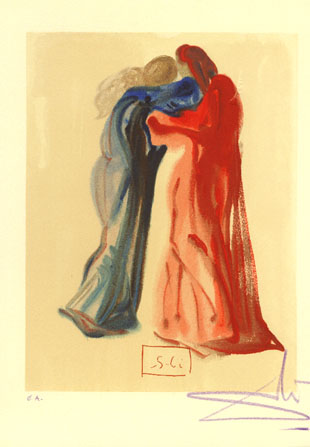 "ENCOUNTER BETWEEN DANTE AND BEATRICE", woodcut # 63 by Salvador Dalí, illustrating Stanza # 29. Here, Dalí powerfully depicts the first meeting between Dante and Beatrice. Both figures, shown in dark blue and dark red colors seem to overflow one into the other. Together, the form a harmonious relation and by growing together, form as if a single unity.

(29) Matilda chants blessings on those whose sins are forgiven, and moves upstream the river Lethe. Dante, filled with rapture, keeps up with her, walking on the other side.

Soon he sees the approach of the Heavenly Pageant: it is an allegory of the Church triumphant, in the form of a religious procession. The center is the Chariot, guarded by four Gospels, and attended by three Theological Graces and four Cardinal Virtues. The Chariot itself is drawn by a Griffon, who represents the two-fold nature of Christ as Man-and-God. Before this central group walk 24 Elders representing the books of the Old Testament. Behind the central group walk 7 Elders representing the New Testament. And the entire procession is led by seven enormous candelabra, whose candles trail a rainbow canopy across the sky.

When the Chariot reaches a point directly across from Dante, a thunderclap resounds, and the entire pageant halts upon this signal.

(30) As the procession halts, the Prophets turn to the chariot and sing, They are summoning Beatrice, who appears on the left side of the chariot. She is showered by blossoms poured from above by a hundred angels. Dante turns to Virgil to express his overflowing emotions, but realizes that Virgil has vanished.

Dante bursts into tears for having lost Virgil, and Beatrice reprimands him. Beatrice details Dante's offenses in not making use of his great gifts. Dante is not allowed to drink the waters of Lethe, in order to wash all memory of sin from his soul, before he had shed the tears of repentance.

(31) Beatrice continues to reprimand Dante until he confesses to his faults and swoons with grief and pain at the thought of his sin. He wakes to find himself in Lethe, held in the arms of Matilda, who leads him to the other side of the stream. There she immerses him in the water, so that he may drink the waters that will wipe out all memory of sin.

Matilda then leads him to the four cardinal virtues, who dance around him and lead him before the Griffon, where he may look into the eyes of Beatrice. In them Dante sees the radiant reflection of the Griffon, who appears both in his human and godly forms: as lion (human) and eagle (the Divine).

Beatrice removes her veil, and Dante beholds the splendor of the unveiled shining of Divine Love.

"THE EARTHLY PARADISE", woodcut # 66 by Salvador Dalí, for stanza # 32. The center of the picture is filled, from top to bottom, with an image of an angel with halo. He holds the hands protectively over the human couple. The left figure rests at the feet of the heavenly messanger.The male figure on the right holds the right hand over his heart. It seems to recall the Biblical Paradise--the first human couple, presented still in their pure innocence.

(32) Beatrice unveils, and for the first time in ten years Dante looks upon her face. When he recovers from this blinding sight, Dante finds the heavenly pageant has wheeled around and is heading east. Dante follows the Chariot to the Tree of Good and Evil, which rises to vast heights, but bears neither leaves nor flowers.

The Griffon ties the pole of the Chariot to the Tree, and the Tree immediately breaks into leaves and flowers. The heavenly pageant greets this wonder with singing a hymn unknown to mortals. Overpowered by the singing, Dante sinks into sleep.

When he awakens, he sees only Matilda. THe heavenly pageant has departed. But Beatrice has remained behind to guard the Chariot. She is now seated upon the ground, on the roots of the tree and under its shade.

Dante then witnesses an allegorical presentation of the corruption of the Church through walth. First, and Eagle (the Roman Empire) attacks the tree and the chariot. Then, a Fox (heresy0. Then the Eagle reurns and covers the Chariot with its feathers. A Dragon (Satan) rips at the chariot's foundations. The chariot then covers itself with feathers (riches) and is converted into a monstrous Beast on which rides a Harlot (the corrupted Papacy) attended by a Giant (the French Monarchy). The Giant beats the harlot and drags the monster into the woods and out of sight. 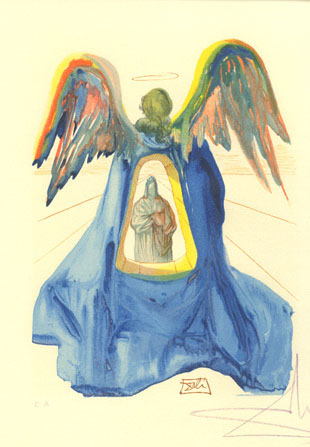 "THE ENLIGHTENED DANTE", woodcut # 67 by Salvador Dalí, for stanza # 33. A surrealistic angel commands this picture, which concludes the Purgatorio. The artist depicts the enlightenment by using the image of both a window and a passageway. The angel is facing the poet (just like the viewer). The poet walks toward us. We see him through the angel, whose intensive, heavenly blue fills most of the rest of the picture.

(33) The seven Nymphs who attend to Beatrice now sing a hymn of sorrow for the grief of the Church, and Beatrice answers with Christ's words announcing his resurrection. All then move onward, and Beatrice summons Dante to her side as the walk on.

Beatrice begins her discourse with a prophesy of the deliverance of the Church, and then utters her final reproach to Dante for having so lost sight of the truth.

Just as she finishes, the train halts before the great spring form which flow the waters of both Lethe and Eunoe. At Beatrice's command, the seven Nymphs lead Dante forward and he drinks the waters of Eunoe. By drinking the waters of Lethe, Dante has already forgotten all sin and error; now every good is strengthened in him. Thus, his final purification is completed, and Dante rises "pure, perfect, and ready for the stars."