'The Madonna of Spiritual Initiation' consecrated in Rishikesh

The ceremony included Vedic recitations and Christian prayers in Sanskrit 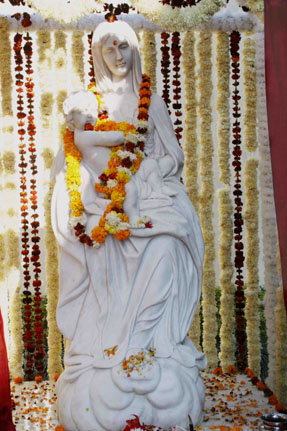 The marble statue of Mother Mary and Baby Jesus in the bower-canopy at the Swami Rama Meditation Academy in Rishikesh, India, in the foothills of the Himalayas. At the consecration ceremony it was named Diksha Shakti Mata -- 'The Madonna of Spiritual Initiation'.

Rishikesh/New York (meaus) The students, staff and residents of the Swami Rama Meditation Academy in Rishikesh (Swami Rama Sadhaka Grama) spent the Christmas Eve 2006 at the ashram with the consecration of a life-size marble statue of Mother Mary and Baby Jesus.

The combined ceremony included Vedic recitations as well as Christian prayers in Sanskrit. The prayers were led by Sister Turiya of the Jeevan Dhara (Christian) Ashram of Rishikesh. She was accompanied by an assisting nun, a Christian ascetic Sadhu Asteya and Swami Muktananda (a Quebecois, born in Haiti).

The water from the Holy Ganga and Holy Jordan (which Swami Veda had brought personally from the spot where Jesus was baptized) were mixed for the consecration. "Salve Regina" in Latin was sung by Ma Gita, Joanne Sullivan, Sylvia Barrata, Sonia, Pierre, Radhe Rani, Mrs. Dixit, and others. "Ave Maria" was beautifully rendered on the harmonium by Swami Muktananda. Swami Veda washed the feet of the Mother Mary and Baby Jesus with the Ganga-Jordan holy water.

Names of the Divine Mother in Sanskrit with 'namah' were recited by Sister Turiya.

It is a normal tradition in India to invoke the life force of the Divine Being to reside in the statue body. This invocation was performed by Acharya Dabral.

It is also a tradition to give a special name to the Deity that is installed. The name of Mother Mary at the Meditation Academy's ashram location is 'Diksha Shakti Mata', which one could express in English as 'Madonna of Spiritual Initiation'.

A devotee has recently sent to Swami Veda a quotation from the book 'Living with the Himalayan Masters' by Swami Rama of the Himalayas, which he would like to share at this time: "Christ is a state of perfection, a state of oneness and a state of truth. Truth is everlasting reality and is not subject to death." 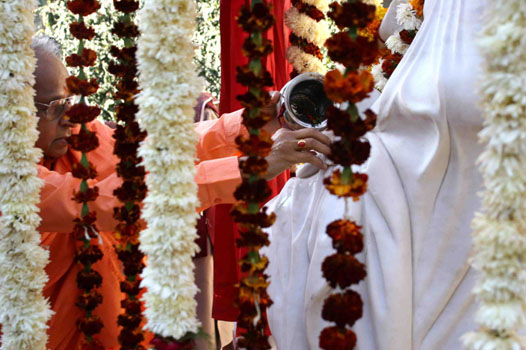 Swami Veda washing the feet of the child Jesus through the canopy, see the round vessel of Ganga-Jordan holy water peeking thorugh the hanging flowers.

Swami Veda sends his love to all his friends, initiates and students around the world, together with this special blessing:

"May the divine child within you be nourished by the milk of the Mother within". 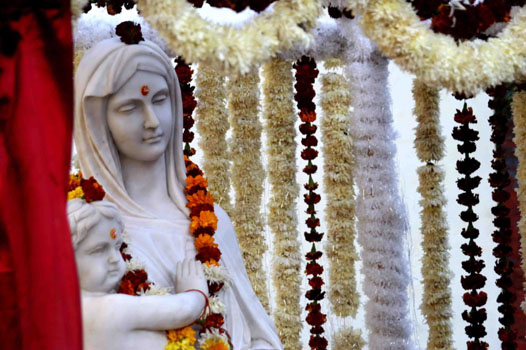 Close up of the face of Diksha Shakti Mata -- 'The Madonna of Spiritual Initiation'.