The invasion and occupation of defenseless Somalia is the latest example of the increasing militarization of US foreign policy. 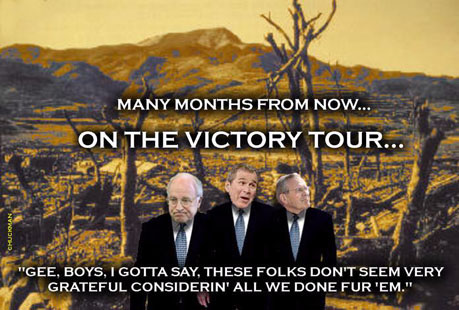 "The US has opened a fourth front in the war on terrorism" the Pentagon announced last week, as if the US did not have enough failing wars on its hands with al-Qaida, Afghanistan, and Iraq.

In a striking irony, F-18 fighter-bombers from the carrier "USS Eisenhower," deadly AC-130 gunships from the US base at Djibouti, and Special Forces units attacked Somalia from sea, air and land. Other US units and FBI agents deployed on the Kenya-Somalia border. As America's latest foreign war began with air strikes from the giant carrier that bears this great president's name, no one seemed to recall President Dwight Eisenhower's magnificent farewell address in 1961 to Americans in which he warned against foreign entanglements and the growing political influence of the military-industrial complex.

Very few Americans understood their nation had just invaded another in an act worthy of the late, unlamented Chairman Leonid Brezhnev.

Much of Somalia has already been occupied by Ethiopia's powerful, US-financed army which invaded that defenseless nation, with Washington's blessing, under cover of the Christmas holiday.

It is an open secret in Washington that the Somalia operation is to be the Bush/Cheney Administration's new model for war against recalcitrant Muslims. The White House failed to convince India or Pakistan to rent their troops for occupation duty in Iraq, but it has succeeded in using Ethiopia's army in Somalia. Ethiopia's repressive regime was only too happy to invade Somalia and received large infusions of aid from Washington. The Administration is duplicating the British Empire's wide scale use of native troops ("sepoys" in India; "askaris" in East Africa) in colonial wars.

But is Somalia really a "hotbed of terrorism" as Washington claimed? The US-Ethiopian invasion of Somalia was sparked by last fall's defeat of corrupt Somali clan warlords. They had recently been armed and financed by the CIA to fight the growing popularity of local Islamists.

The warlords had kept Somalia in turmoil and near anarchy for 15 years. Last year, a group of Muslim jurists and notables, the Union of Islamic Courts, managed to defeat the warlords and impose a rough form of law and order on many parts of chaotic central and southern Somalia. Northern Somalia is ruled by a secessionist government based around the strategic port of Berbera.

The conservative Islamic Courts were sympathetic to pan-Muslim causes. But there is no evidence so far that they were involved in anti-American jihadist movements and had no identifiable links, as Washington claimed, to al-Qaida. Now, Somalis are seething with anger at America, providing yet more volunteers for jihadist operations. In fact, the Christmas US-Ethiopian invasion of Somalia threatens to ignite violence across the Horn of Africa.

A handful of African Al-Qaida suspects in the 1998 bombing of US Embassies in East Africa may have been in Somalia, but going to war against a sovereign nation to try to assassinate or capture a handful of suspects is like using a nuclear weapon to kill a gnat and is sure to generate more anti-US violence. Air strikes by carrier-based US F-18's and AC-130 gunships killed between 50 and 100 Somali civilians but, apparently, no al-Qaida suspects. The real aim of the US air attacks was to destroy remaining fighting units of the Islamic Courts and clear the way for the US-imposed Somali figurehead government.

The invasion and occupation of defenseless Somalia is the latest--but probably not the last--example of the increasing militarization of US foreign policy. VP Dick Cheney's new Pentagon golden-haired boys, Special Operations Command, elbowed aside the humiliated CIA and the feckless State Department and vowed to "drain the Islamic swamp" in Somalia.

Thus begins President George Bush's fourth war against the Muslim World. Invading dirt-poor Somalia is Bush's last stab at military glory and a final effort to convince disgruntled American voters the so-called "war on terror" is a success. So also continues Washington's preference of only invading small nations that cannot offer much initial resistance by conventional forces: Grenada, Panama, Haiti, Afghanistan, Iraq and now Somalia. Afghanistan has only 29 million wretched people; Iraq about 26 million--two-thirds of them in rebellion.

The administration is again recklessly charging into a thicket of tribal politics in a remote nation it knows nothing about. US policy in Somalia is being driven by neoconservatives seeking war against the entire Muslim World, and self-serving advice from ally Ethiopia. Israel, which has maintained close intelligence, military, and economic links to Ethiopia's regime, is also discreetly involved: it has long conducted covert operations in the Horn of Africa and the Red Sea's western littoral.

Eritrea's 1993 secession took away Ethiopia's natural access to the sea, leaving it landlocked.Ethiopia's strategic goals in Somalia may be to seize one or more deep-water ports, turn Somalia into a protectorate, and crush any Islamic movements that might enflame its own voiceless Muslims, who comprise half of Ethiopia's 73 million people.

America's attack on Somalia recalls Afghanistan. The US is again blundering into ancient clan and tribal conflicts, using foreign troops and local mercenaries to defend a puppet regime without any popular support. US-Ethiopian intervention in Somalia is certain to re-ignite the murderous clan rivalries that brought it to the current state of anarchy.

Like Afghanistan, Somalia was easy to invade, but may prove very difficult to rule, or eventually leave. Many Somalis saw the now scattered Islamic Courts militias as their best hope for stability and normalcy. Now they are back to zero ? or worse.

Like Afghanistan after the US invasion in 2001, Somalis have been slow to oppose invasion. But in time they could mount serious resistance to the new US-Ethiopian condominium over Somalia.

From 1899 to 1930, Somali mujahidin waged a fierce resistance struggle against the British, who killed a third of the native population. In 1954, Britain handed the Somali ethnic region of Ogaden to Ethiopia, thus assuring continued hostility between the two old foes.

Now we have a new war, in a faraway place, that could become yet another annoying, intractable headache for the west and yet another incubator of revenge-minded jihadis.

Eric Margolis is contributing foreign editor for Sun National Media Canada, and theauthor of War at the Top of the World.