A Grave Future and Turmoil Ahead for Russia 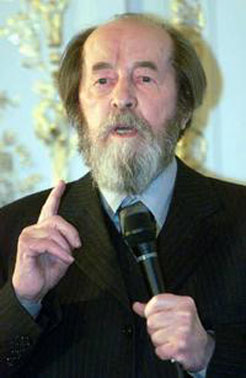 Alexander Solzhenitsyn: the wide gap between the rich in Moscow and the poor in the rest of Russia will have the most grave consequences, unless the government does something soon to correct this problem.

Moscow/New York (meaus) At the age of 88 years, Russia's most prominent and world-renowned writer Alexander Solzhenitsyn has been living away from the spotlight. However, his recent article published in the influential newspaper Rossiyskaya Gazeta has brought him once again to public's attention.

His article outlines the roots of the communist revolution in Russia 90 years ago, in 1917. His shocking conclusion is that the situation in today's Russia is in some respects not that much different as it was 90 years ago. The deep gap between the rich and the poor in Russia, the stark contrast in lifestyle and moral attitudes between the glitzy Moscow and the poverty and backwardness of the rest of the country. "If the government fails to do something about this gap soon, consequences would be grave", says Solzhenitsyn.

His article was published as an introduction for one of the volumes of "The Red Wheel", a 10-volume (unfortunately, still unpublished) saga about the 1917 communist revolution, which he had finished in 1990 and which he considers his most important work.

To emphasize his message, the article will be also published as a separate pamphlet under the title "Thoughts on the February Revolution", and sent to government officials across Russia.

The 88-year old writer has shunned the public spotlight in recent years, due to his fragile health. When he returned to Russia from the West in 1994, he found the country in disarray, and looted by the Western financiers and speculators working together with the former communists in charge of industry and raw materials of the country. Solzhenitsyn's hope for a resurgence of his country and his patriotic feelings have aligned him with the Russian President Vladimir Putin, who has presented his time in office as a period of recovery, following the economic and social turmoils which took place in Russia after the collapse of the former Soviet Union in 1991.

"Despite Putin's background as a high-ranking KGB official, Solzhenitsyn has a high regard of the Kremlin's increasingly assertive foreign policy", said his wife Natalya.