50 years ago the Dalai Lama of Tibet was enthroned. Since then, he has been searching for freedom and peace. 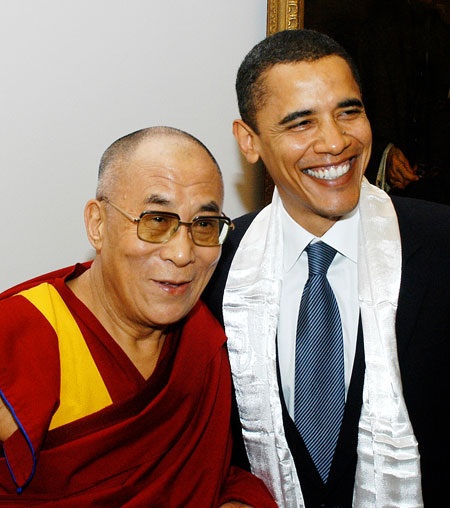 The US President Barack Obama and H.H. the Dalai Lama of Tibet during his visit in Washington. President Obama was not afraid of China, and paid respect to the spiritual leader of Tibet with a friendly welcome. As usual: Peking protested.

New York/New Delhi (mea) A very important date in the world history is November 17, 1950. On this very day, the present 14th Dalai Lama of Tibet was enthroned at the age of only 15 years. It is a good reason to recall this important event from 50 years ago. And it is right to rememind especially the young generation. What had happened in those days? What failed and what has been achieved?

Tibetans traditionally believe him to be the reincarnation of his predecessors, and a manifestation of "Avalokeshvara", the Buddha of Compassion. Besides the continuing, permanent political controversy with the communist China for decades, the Dalai Lama, who lives in exile in India, is now known around the world as the "spiritual leader of all Tibetans". The 75 year old Dalai Lama has been calling himself for a long time a "monk and pilgrim". So, the fact is: the 14 Dalai Lama became an important political personality after China occupied Tibet by military force, and has been destroying the Tibetan people, their culture, language and religion.

The Dalai Lama was born in Taktser, Qinghai and was selected as the reincarnation of the 13th Dalai Lama, who had died two years before. According to Tibetan tradition, he was only formally recognized as the 14th Dalai Lama on November 17, 1950, at the age of 15. He inherited the control of a government over an area corresponding roughly to the Tibet Autonomous Region, just as the nascent People's Republic of China wished to reassert central control over it. The respective governments reached the "Seventeen Point Agreement for the Peaceful Liberation of Tibet", an agreement for a joint Communist-Lamaist administration that lasted until 1959.

During the 1959 Tibetan uprising, which China regards as an uprising of the feudal landlords, but the Dalai Lama regards as an expression of widespread discontent, the Dalai Lama left his country during a night. Fearing for his life, the Dalai Lama fled Tibet with the help of the CIA's Special Activities Division. He crossed the border into India on March 30, 1959 and reached Tezpur in Assam on April 18. Sometime later he set up the Government of Tibet in Exile in Dharamsala. This town is often referred to as "Little Lhasa". After the founding of the government in exile, he reestablished approximately 80,000 Tibetan refugees who had followed him into exile.

"One must be very grateful to India and its governments for hosting the young Dalai Lama and the refugees from Tibet since the very beginning, and also in the following years up to now", said the AP correspondent Joe F. Bodenstein. As an eyewitness, he visited the Dalai Lama as the first correspondent of the Associated Press, the world's leading US News Agency. His reports were helpful to bring more international attention to the suffering of the Tibetan people.

"In the first years, His Holiness was kept quite safe in an Indian military camp. No one could go uncontrolled to this prison-like camp in the Himalayan mountains", said Bodenstein in an interview. "But it was necessary to shield the Dalai Lama this way from possible attacks by Chinas security services. In those days, a kidnapping of the Dalai Lama by the Chinese could have provoked a war at the Indian-Chinese border."

At the very first meeting of the young Dalai Lama with the AP-Correspondent, Bodenstein suggested to him to visit the Western world as often as possible. "The Indian government has forbidden me to visit Europe and the USA, in order to avoid political problems with China", the Dalai Lama confessed to him. But Bodenstein encouraged the young man, who was in those days inexperienced the in Western policy: "The Dalai Lama is the first monk of Tibet, and he visits the West as a pilgrim. The first address for him to visit should be the Pope in Rome. 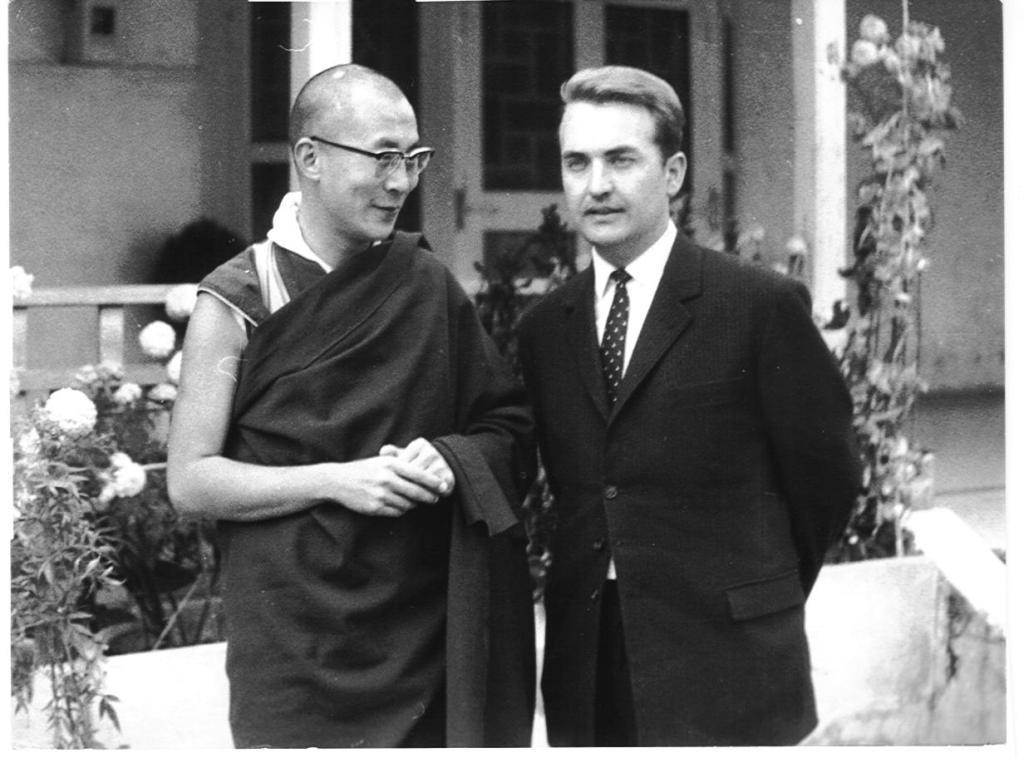 The Dalai Lama as a young man in Indian exile after escaping the communist China, in April 1959. The photograph was taken in the early sixties at the Dalai Lama's Residence-Garden (an Indian Army Camp in the Himalayas). The first interview with the AP correspondent Joe F. Bodenstein with His Holiness at a time when the future and destiny of the Dalai Lama was absolutely uncertain. What he has made out of his life for Tibetans is just great!

The eternal pilgrimage with up and downs

The Dalai Lama understood what it meant. Since then up to 2010, he has visited countless times many, many countries around the world. He met top leaders including several US Presidents, among them also President Barack Obama. He exchanged thoughts with three Popes in the Vatican, met Christian bishops and the religious leaders of Israel and of other religions. Alltogether, thousands of books, booklets, films and declarations have been published. And China goes on to bring attention to the Dalai Lama by protesting, whenever he gets an invitation to another country, or whenever he is honored or receives and award, for instance the Nobel Prize. In fact: China's protests against the Dalai Lama only increase his reputation around the world.

Millions of people in Europe and America have seen the Dalai Lama in person during his spiritual lectures. Thousands of people come to his public meetings, also in the West.

For all of them, the Dalai Lama has become a moral institution. In his fight for human rights, freedom and democracy he has become an idol and a symbol for people in those countries that suffer from the absence of rights and order, freedom of thought and religion.

No success in the main goal: to return home to Tibet.

But the Dalai Lama has failed up to now in his main goal: to return home to his people in Tibet, and work in a new democratic era of freedom and peace. He is an optimist, but feels that the achievement of this goal during his lifetime is uncertain. He takes care to build up an administration for the future free Tibet. In the last 50 years, he has introduced many changes. His great interest since his young days in communicating with Europe and the USA was very helpful for him to make broad-minded decisions.

"His Holiness is the most intelligent and diplomatic Dalai Lama in history", says Bodenstein. "By his activities in exile he has achieved much more for Tibet than he would have accomplished in Tibet under the pressure and control of the communist Chinese administration. In the beginning, the way was very hard for the Dalai Lama. He was insulted by many officials, who did not even want to shake hands with him.

Bodenstein does not agree with the criticism from some of the Dalai Lama, about their complaints such as: "he visits Europe (especially Germany) and USA too often"; "he only goes where he gets big donations"; "he forgot those who helped him in the early days", or that "his ministers in exile and the Tibetan advisers abroad are 'moneymakers' and arrogant."

"More than half of the Dalai Lama team was born in freedom, and they have no personal memory of Tibet", said Bodenstein in an interview. "They are a product of the society in which they grew up. The youth in a democratic society is neither obedient nor grateful".

One has to consider: in the meantime, the Dalai Lama became an old man. Who knows how far his administration of 'youngsters' is informing him properly about things that are happening. And what may they be hiding from him? One only can hope that His Holiness is not surrounded by spies for the Chinese. It could create mistrust in the West. And this would be very harmful for all Tibetans.