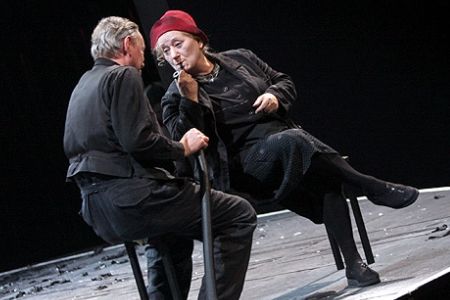 Members of a German troupe perform a scene from Bertolt Brecht's 'Mother Courage and Her Children' directed by Claus Peymann during the 26th Fajr International Theater Festival at Tehran's Vahdat Hall on February 14, 2008.

Tehran/New York (mea) Eleven Nations will participate in the 2011 Fajr International Theater Festival to be held from February 5 to 20, 2011 in Tehran, presenting some 153 performances from Iran and other countries. Out of 200 works submitted to the festival for consideration, 14 plays from countries such as Italy, Poland, Canada, Germany, Switzerland and Russia have been selected for international competition.

The plays include 'Antigone' directed by Homayoun Ghanizadeh from Estonia and 'The Europeans' by Jiri Adamec from the Czech Republic. 'Antigone' is a tragedy by Sophocles written before or in 442 BC. The play expands on the Theban legend that predated it and picks up where Aeschylus' 'Seven Against Thebes' ends.

Renowned German director Peter Stein will perform his Faust Fantasia during the festival and Italian theater director Romeo Castellucci will stage a play and hold workshops at the annual event.

'Pandora 88' by Andrew Dawson (Germany, Canada) and 'Women of Troy Calamities' by Salvatore Tramacere (Italy) are also among the plays to be staged in the International Section of the festival.

Theater workshops will be held simultaneously in Tehran and other provinces.Twelve plays will go on stage at the regional theater section. These are the selected works of the recent Marivan National Theater Festival.

Twenty plays will go on stage at the Iran Theater Retrospective section and nine plays will be performed in the play-reading section. Theater scholars from 19 countries such as the US, Croatia, Georgia, China, Turkey, France and Canada will present papers during the festival.

Fourteen articles by Iranian scholars have been accepted and will be published in a journal during the festival.

In addition, some 24 street plays will also be performed this year as well as nine performances in the New Experiences section and 12 works in the Festivals' Festival section which will present selected works from previous editions of the festival.

Iran holds the international Fajr film, theater, music and visual arts festivals every year to mark the anniversary of the 1979 Islamic Revolution.