Fascination with the Man in a Leather Coat 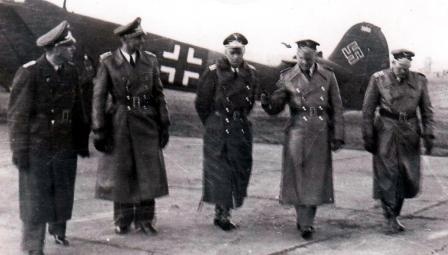 A Fashion Show in the former German Army? The "Lords the Air Force" in leather coats in front of an airplane of the Deutsche Luftwaffe in the year 1941.

Berlin (bpb) „Men in Coats" is the title of a 2011 Calendar, made by the German publisher Dr. Siegfried Noehring ( http://www.galerie-im-netz.de ). It contains 13 private photographs, showing German officers in their historical leather coats. "The pictures have never been published before", said Noehring, himself an expert in this field.

"Uniforms in general, and specially leather coats have a certain world-wide fascination", Noehring says. Serious collectors of these historical items from Europe are mostly in the United States. Many US Soldiers, who were in Europe in 1945 became later collectors of these coats. The small calendar in German and English is for sale and is, at the same time,a "contribution to historical documentation".