Text of the telegram to the son the the deceased 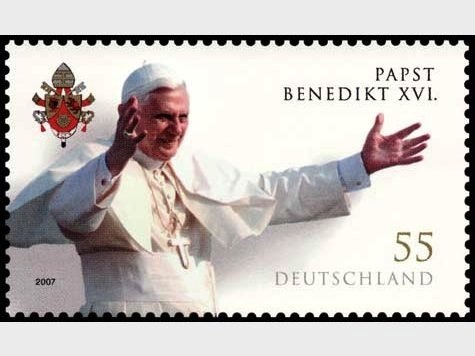 Condolences of the Pope to the House of Habsburg. The photo shows Benedict XVI. on an official postage stamp of the Federal Republic of Germany.

Rom/München (mea) Pope Benedict XVI. has honored the merits of Otto von Habsburg, who has died in Germany at the age of 98 years. With this, the leader of the Catholic Church has reacted in the same spirit as the millions of men and women in Western and Eastern Europe, who have held the son of the last Austrian Kaiser and King of Hungary in great esteem for his life-long engagement for peace in Europe and for understanding among the peoples. The telegram of the Pope is addressed to the new head of the family, Karl von Habsburg. He lives presently in Bavaria.

The internet bulletin „Prometheus", edited in the USA and which is the organ of the „Alexander Order Pour le Merite", is publishing the text the the telegram with the Papal blessing, as issued by the Vatican. This is to be seen in the context that the Emperor's son isan honorary member of the OAG, and that the media in the United States had hardly taken any notice of the death of this historical personality.

In the political circles of Europe, including Hungary the the Slavic lands, there was much talk that apparently neither the US President Barak Obama nor his advisors knew. who is Otto von Habsburg. This is even more amazing due to the fact that the number of US citizens of German ancestry has been for hundreds of years very large.

The text of the telegram, published by the Vatican (kath.net/as) Vatikan on the occasion of the death of the Kaiser's son on July 4, 2011 in his house on the Starnberger Lake is as follows:

„To His Imperial highness, Archduke Karl of Austria!

With deep sympathy I have received the news of the homecoming of your father, the Imperial and Royal Highness the Archduke Otto of Austria. In the hour of mourning the painful loss, I join together with you and the whole Imperial Family in prayer for the deceased.

In his long and full life, the Archduke Otto has become an witness of the changeable history of Europe. In responsibility before God and in the knowledge of his significant heritage, he has been tirelessly engaged as a great European for peace, relations among the peoples and for a just order on this continent.

May God, the Lord, richly reward him for his many-faceted life work, and may He grant him the full life in his heavenly kingdom. On the behalf of Mary, Mother of God, I give to the family and all those who are in sorrow over the Archduke Otto and who pray for his eternal salvation, from my heart the Apostles' Blessing."