The Olympic Fire went around the world 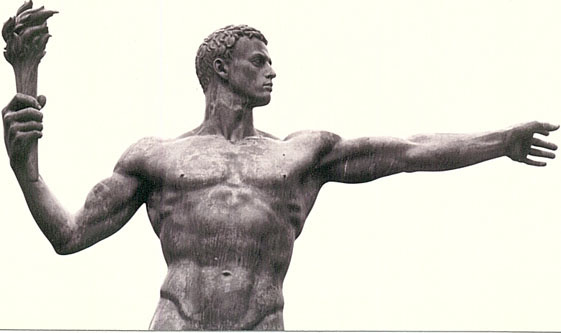 The photograph shows "The Great Torch Bearer". The bronze sculpture by Arno Breker is displayed at the Museum Arno Breker in Germany.

Athens/Berlin/New york (bpb) The Olympic Fire fascinates people around the world. For the first time in history, the flame has visited all five continents represented by the Olympic ringhs. 34 cities and 26 countries outside Greece were included in the Flame's route, which replicates the Olympic history since its revival in 1896. The Olympic Torch Relay ends on the day of the opening ceremony in the central stadium of the Games. The flame will arrive at the Athens Olympic Stadium on the evening of August 13, 2004. The Olympic Games 2004 can begin.

In all the past decades, famous sportsmen and other prominent figures took part in the torch relay. In USA, Los Angeles was the first of the four US cities hosting the torch relay. The next places were Atlanta, St. Louis and New York, before continuing its journey across the globe to the Olympic Games in Athens, Greece. In USA, the award-winning movie star Tom Cruise, actor Sylvester Stallone, World Boxing Council Heavyweight Champion Vitali Klitschko, Gold Medal swimmer Janet Evans and Rafer Johnson carried the Olympic Fire.

In our times, the Olympic Flame is ignited several months before the opening celebration of the Olympic Games at the site of the ancient Olympics, Olympia, Greece. Eleven priestesses (played by actresses) light the fire by placing a torch in a concave lens which concentrates rays from the Sun. The torch is then transported to the host city of the upcoming Olympics by means of a torch relay. Traditionally, the fire is carried on foot,but other means of transportation have been used as well. The runners include athletes and celebrities, but also many non-famous people carry it. The Olympic Torch Relay ends at the day of the opening ceremony in the central stadium of the Games. The final carrier is often kept secret until the last moment, usually a sports celebrity of the host country. The final bearer of the torch runs towards the cauldron usually at the top of a grand staircase and then uses the torch to ignite the flame in the stadium. This flame burns throughout the celebration of the Olympics. It is extinguished at the closing ceremony. 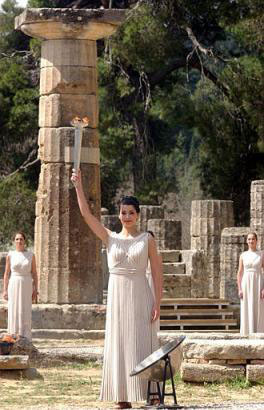 The lighting of the Olympic fire at Olympia, Greece in 2004. The ancient tradition continues to inspire the young generation into the 21st century.

The History of the Sacred Fire

For the ancient Greeks, fire had a divine connotation. It was thought to have been stolen from the gods by Prometheus. Therefore, fire was also present at many of the sanctuaries in Olympia. A fire permanently burned on the altar of Hestia in Olympia. Also during the Olympic Games, which honored Zeus. Additional fires were lit in his temple and that of his wife, Hera. The modern Olympic flame is ignited at the site where the Temple of Hera used to stand. Fire did not appear at the modern Olympics until 1928. Dutch architect Jan Wils had included a tower in his design for the Olympic stadium for the 1928 Amsterdam Olympics, and came up with the idea of having a fire burn throughout.

The idea of an Olympic Flame was met with enthusiasm, and was incorporated as a symbol of Olympism. German sports official and sports scientist Carl Diem conceived the idea of an Olympic torch relay for the 1936 Summer Olympics in Berlin. More than 3,000 runners carried the torch from Olympia to Berlin. German track and field athlete Fritz Schilgen was the last to carry the torch, igniting the flame in the stadium. The torch relay also became part of the Olympic Games.

The Olympic Flame had burned at the Winter Olympics in 1936 and 1948, but the first torch relay occurred at the 1952 Winter Olympics in Oslo. The fire was not ignited in Olympia, but in Morgedal (Norway) in the fireplace of the home of Sondre Norheim , who pioneered the sport of skiing. The fire was also lit there in 1960 and in 1994. Except for 1956, the relay started in Olympia for all other Winter Games. In 1956, the relay began in Rome.

Although most of the time the torch with the Olympic Flame is still carried by runners, it has been transported in many different ways. The fire traveled by boat in 1948 to cross the English Channel, and it was first transported by aeroplane in 1952, when the fire traveled to Helsinki. In 1956, the equestrian events were held separately because of strict quarantine regulations in Australia. All carriers in the torch relay to Stockholm, where these events were held instead, traveled on horseback.

Remarkable means of transportation were used in 1976, when the fire was transformed to an electronic pulse. From Athens, this pulse was carried by satellite to Canada, where a laser beam was used to re-light the fire. In 2000, the torch was carried under water by divers near the Great Barrier Reef. Other unusual means of transportation include an Indian canoe, a camel, and a Concorde.

Another means of catching attention has been the lighting of the fire in the stadium. At the 1992 Barcelona Games, Paralympic archer Antonio Rebollo shot a burning arrow into the cauldron in the stadium. Two years, later, the Olympic fire was brought into the stadium of Lillehammer by a ski jumper.

A great chance for the last runner

Over the years, it has become a tradition to let famous athletes or former athletes be the last runner in the relay. The first well-known athlete to light the fire in the stadium was 9-fold Olympic Champion Paavo Nurmi, who excited the home crowd in 1952. Other famous last bearers of the torch include French football star Michael Platini (1992), heavyweight boxing champion Muhammad Ali (1996) and Australian aboriginal runner Cathy Freemann (2000).

On other occasions, the people who lit the fire in the stadium were not famous, but nevertheless symbolized the Olympic ideals. Japanes runner Yoshinori Sakai was born in Hiroshima on August 6, 1945. It was the day the US nuclear bomb Little Boy destroyed that city. He symbolised the rebirth of Japan after the Second World War when he opened the 1964 Tokyo Games.