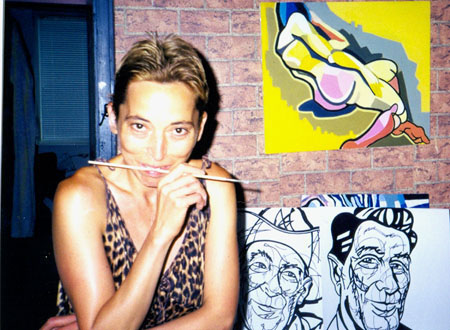 The Bulgarian artist Elisaveta Aleksandrova in her studio in Sofia.

The painter Elisaveta Aleksandrova was born in Varna, Bulgaria on June 17, 1967 into an intellectual family. Her mother practiced for many years as a psychiatrist, and her father teaches violin.

Elisaveta has been painting since childhood, when her mother moved to Sofia, the capital of Bulgaria. Already as a child she became more attracted to the works of expressionists than to the classical painters. At that time in Bulgaria, individual needs and interests of students were often ignored, and this inclination of the young Elisaveta often got her into conflict with her art teachers. This almost destroyed her dreams to become a painter.

Eventually, she was accepted at the Academy of Fine Arts in Sofia. Often, she would use the mentally disturbed patients of her mother as models: they had very expressive faces, which appealed to the young artist. During this time she was much drawn to drawing portraits and exploring the depiction of the human face. She completed her studies at the Academy in 1992.

After graduation, she worked as a caricature artist for newspapers in Sofia, taught painting and worked as a graphic designer. Now she continues to work as a free-lance artist, who uses all her energy to paint and draw.

In a recent interview, Elisaveta Aleksandrova revealed to me some interesting things about herself and her work. 'I always keep in mind the idea that a good contemporary portrait must be the painter's subjective reflection of reality. It cannot be simply a mechanical transfer of an image to paper or on canvas. The subjective view and the artist's uniqe way of seeing the subject is for me more important than a literal imitation of Nature.' 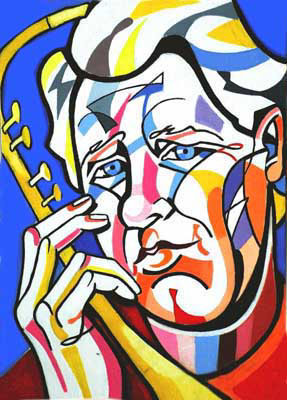 Portrait of Bill Clinton, a great favorite with the young people in Bulgaria.

Elisaveta dislikes the 'sweetish' in the arts. In painting as in literature, she is more attracted to the grotesque and to the expressive. She says, 'when I look at a portrait, it is most important to me that it contains an expressive feeling. I like to explore the shapes of the human face until I clarify its essence in my mind to the point of a formula or a hieroglyph.'

Her preferred means of expression is the line, and she often makes preliminary drawings before painting a portrait. She is more thoughtful when painting, than in her personal life. Her friends say that she often thinks categorically and has strong opinions, and some say that this also sometimes shows up in her drawings. But she is sure of this: 'a real artist cannot paint in the style of Leonardo today, in the style of Rembrandt tomorrow, but never in his or her own style.' 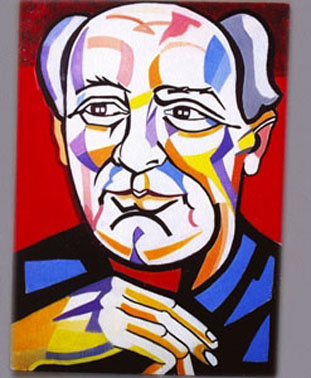 Michael Gorbachev, one of the great statesmen of our times. Painting by Elisaveta Aleksandrova, in the collection of US Museum of European Art.

The web site & contact information for the artist is: