Homage to the Japanese writer from a sculptor 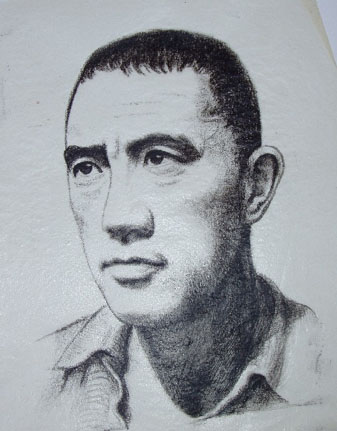 Portrait of the writer Yukio Mishima. This is the first of three drawings to illustrate the HOMMAGE A YUKIO MISHIMA, Paris 1975

Paris (bpb) It is a good tradition among the leading artists in Europe to honor each other on certain occasions by dedicating their works. In 1975, the sculptor Arno Breker dedicated a suite of three lithographs to the late Yukio Mishima, on the occasion of his 50th birthday. For the drawings Breker used the technique of blanc et noire. The famous printer of lithographs, Fernand Mourlot, was commissioned to print the works. The studio of Fernand Mourlot was the most important printing center in the 20th century.

At Mourlot Press were printed most of the graphic works of Marc Chagall, Pablo Picasso, Jean Miro, George Braque and Arno Breker. And before them, Henry Matisse, Aristide Mailoll, Charles Despiau and other famous painters cooperated with Mourlot, just as others like Renoir, Dunoyer de Segonzac and Derain had worked together with his father.

Breker made the drawings on a special lithographic paper. This was the basic material to convert it to the printing plates. The master used only the black color for the motives. It was meant to form a clear contrast against the white Arches paper, on which they were printed. A different effect was achieved on some of the prints by using Japon nacre, an original Japanese hand-made paper. 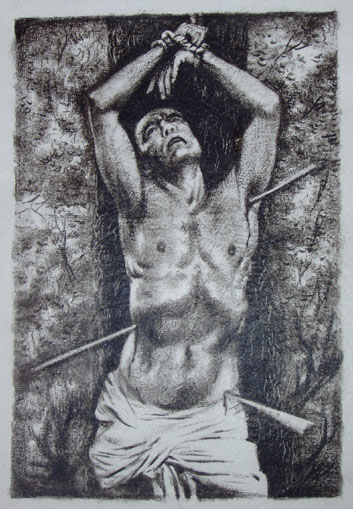 Yukio Mishima in the pose of Saint Sebastian

One lithograph shows Mishima as the Saint Sebastian. Arno Breker used a photograph of Mishima, posing in front of the camera. Mishima was very fond of this historical personality of Christianity.

Sebastian was born in Narbonne, the son of a wealthy Roman family. He was an officer of the Imperial Roman army, captain of the guard, and a favourite of the Emperor Diocletian. During Diocletian's persecution of Christians, Sebastian visited them in prison, bringing them supplies and some comfort. Sebastian is reported to have healed by making the sign of the Cross over the wife of a brother soldier--supposedly an archer. He was responsible for the conversion of many soldiers and a governor to Christianity. Charged as a Christian, Sebastian was tied to a tree, shot at with arrows, and left for dead. He survived, recovered, and returned to preach to Diocletian. In a rage at his recovery, the Emperor then had him beaten to death some time in 288.

During the 14th century, the random nature of infection with the Black Death caused people to liken the plague in their villages to being shot at by an army of nature's archers. In desperation, they prayed for the intercession of a saint associated with archery, and in this way, the Saint Sebastian became associated with the plague. His Feast Day is on January 20th. 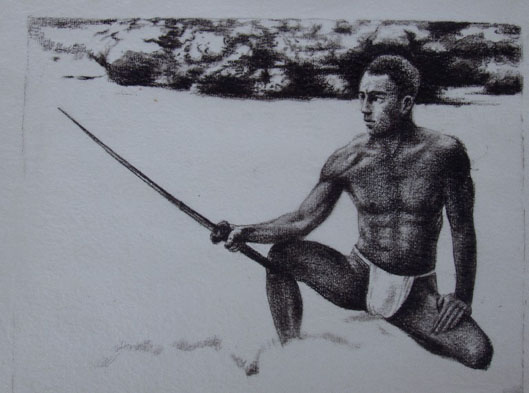 Mishima with sword in a landscape of winter: With a flaming heart, ready to fight in snow and ice. This ancient, traditional pose was preferred by the Samurai.

The third lithograph by Arno Breker shows Yukio Mishima sportive. He placed the nude "Samurai" into a winter landscape. We see Mishima alone, a solitary warrior who fears no one. In the art-works by Breker, we find some essential things that are typical for the great Japanese writer. Decades after his death, Mishima remains in our hearts and mind not only because of his literary works, but also in the myths and legends surrounding him.