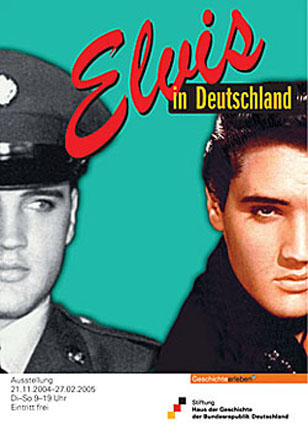 Elvis half-and-half: the poster for the exhibition for the 70th birthday anniversary of the King of Rock.

Bonn/Berlin (bpb) Elvis Presley could celebrate his 70th birthday on January 8, 2005. Unfortunately, he died already at the age of only 42 years on August 16, 1977. But Elvis, one of the greatest starts of the Pop Culture, lives on through his songs. His records, CD's and tapes continue to sell well around the world. In Germany, Elvis Presley has served part of his military duty in the US Army.

The famous German Museum of History in Bonn (Haus der Geschichte) prepared a documentation about Elvis Presley's stay in Germany. The exhibition continues from November 20, 2004 to February 27, 2005.

The successful director of the Museum, Prof. Dr. Hermann Schäfer was the first one with the idea so present such an exhibition. "On display are more than 300 objects from private and public collections", reports Schäfer about the project. Many of the objects are from the collections of the Museum of German History. Among them is the duffel bag, with which the "King" got off the ship in Bremerhaven, as well as parts of the original furniture of the hairdresser's shop in the "Ray Barracks" in Friedberg, where Presley got his haircut. To the prominent personalities who loaned objects from their personal collections are also the former German rock stars Ted Herold and Peter Kraus, both of whom are still today active in the show business.

The press spokesman of the Museum, Pater Hoffmann recalls: Elvis Presley combined the "white" Country and Western music with the "black" Rhytm 'n' Blues to his own style, the Rock 'n' Roll. In 1953 he releases his first record, and a few years later captures a wide, international audience. He brings to the young people a new feeling for life. With his characteristic hairstyle, his extravagant clothes and his lascivious gestures, he represents a break with the old-generation's lifestyle.

The secret of the other Elvis has not been brought out 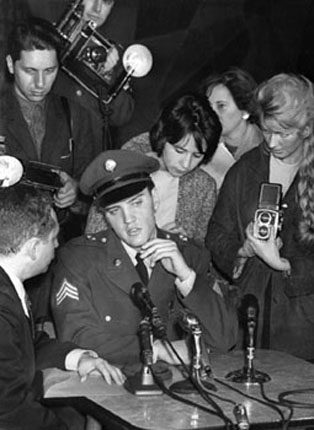 Meet the press: Elvis Presley is being interviewed. On one such occasion he met his "friend Joe", his companion for secret ramblings in the area of Spessart, Miltenberg und Amorbach.

The authors of the exhibitions in the Museum of German History took much effort to arrange this exhibition. Still, they did not succeed in discovering new information about Elvis Presley. His private life continues to remain hidden behind a wall of silence. Who knows, what Elvis Presley was like behind the barracks gates between 1958 and 1960? What were the circumstances and the background of his relationship to the young girl Priscilla, then only a minor, who eventually became his wife? Who knows anything about Elvis's secret rambles with the younger journalist Joe Bodenstein? About the incognito stays in Spessart, or about Presley's visit in the romantic Miltenberg on the Rhine? He stayed overnight there in an old inn on the steep road to the Miltenberg Castle. The clever and discrete landlady Conrady let the charming Elvis stay in the bed in which once slept the famous explorer Sven Hedin. The wall of silence about his private life continues. And maybe it is good that way. 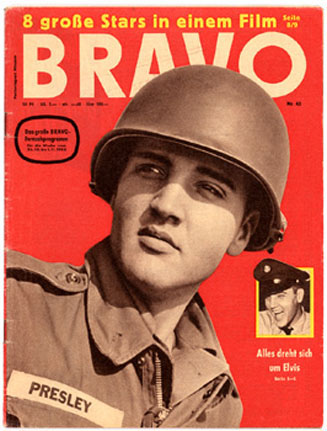 Love Elvis for ever. The singer was a much demanded star of BRAVO, a favorite magazine of the young people in Germany.