France and Netherlands said NO to the constitution 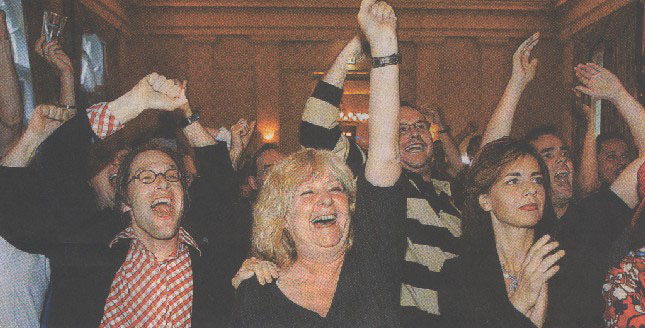 Happy Europeans in the Netherlands: They are against a constitution that would rule and dictate everything, and said NO. The majority of the people in France did the same.

Paris/Amsterdam/New York (bpb) The majority of the people in France and the Netherlands just said NO to the intention of the politicians to give the European Union a constitution for all the member countries of the European Union. For all those, who have been criticising for years the much too hurried expansion of the EU, it is the beginning of the end of the European dream. This great idea of a democratic Europe, united in freedom is in danger. The government of the United States declared: America is interested in a strong and democratic Europe.

After the Second World War, it was the idea of the French leader Charles de Gaulle and the German Chancellor Konrad Adenauer to create a European Community, with the goal of a united Europe. Somehow, the USA was a shining example for the European politicians. Soon, also Italy joined this idea. The close co-operation of these countries started in the spirit of a good partnership with USA. Adenauer and de Gaulle wanted a "Europe der Vaterländer". That means a "Europe of Fatherlands". This word has for both Germany and France a great emotional and patriotic importance.

For them, a United Europe should be unification, where each country is independent in its way of life and culture.

When these politicians talked about United Europe, they only meant a Europe of traditional Christian culture, based on ideas of antiquity. The majority of the people in Germany, France, Italy, Netherlands, Belgium and Luxembourg were in agreement on these ideas. Then, Germany became the motor of a united currency, the Euro. This was the end of the famous German Mark. And it was also the end of the people's trusting their politicians. 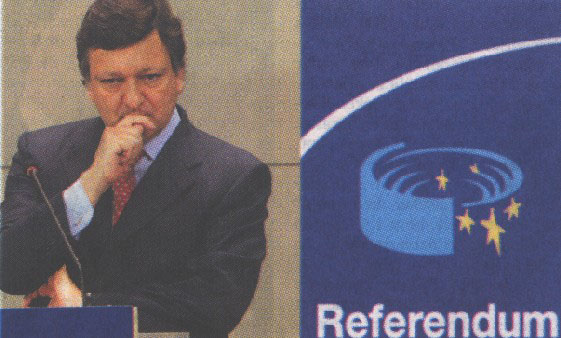 One of the most hated EU politicians in Brussels: José Manuel Barroso, the President of the European Commission. The former Prime Minister of Portugal is now called by his political enemies "the tricky José". Now, he is looking for new ways to persuade the voters in the EU countries to say yes at the end of the process.

Why? The fact is that the introduction of the Euro brought about a devaluation of money. One Euro had the value of about two German Marks. The businesses grabbed at once their chance: they asked for a product that had cost once one D-Mark, now one Euro. At the same time, the salaries and the pensions did not increase. That means, the ordinary people suffered by devaluation.

The same happened in France, Italy and the Netherlands.

In the meantime, politicians like the French President Chacques Chirac and the German Chancellor Gerhard Schroeder (Social Democrat) requested a fast expansion of the European Union. The EU Administration in Brussels supported for its own interest, in order to get more power and influence in this process.

The leading politicians opened up the EU for countries like the Czech Republic and Poland. The German people have great reservations against these former communist countries, since millions of German citizens were driven out of those countries after 1945. They settled down as refugees in Germany and Austria.

Another reason, why people in the Western Europe are tired of their politicians is this: most of these politicians now support the idea to let the Asian, Moslem country of Turkey into the United Europe. The political leaders to not respect the will of the majority of the people. The people do NOT want Moslems or any other Arab religions in a United Europe. Germany has had to suffer the most from the immigration of Turkish workers and businessmen. There are German cities and townships with large Turkish communities, which include mosques and Koran schools. State security and intelligence agencies are warning: such isolated education can be the breeding grounds of terrorism.

The people's criticism of their elected politicians include: the money is losing its value, jobs are going to foreigners from the eastern countries like Poland, and the lowering of salaries in the industry by salary dumping.

People hate especially the arrogant behaviour of the EU bureaucracy in Brussels. The administration is like a dragon with a thousand heads, say the ordinary people. The EU administration wants to rule and dictate every last village in all the member countries.

German government did not allow its people to vote

The NO of the people in France and the Netherlands was a shock to all those politicians, who had privately profited all these years thanks to these regulations. Chaques Chirac just changed his government, but continues to follow the old wrong ideology. The German Chancellor Schroeder, in June 2005 without a majority in the German Parliament, votes for new enlargement of the EU. According to him, not only south-east European countries should be allowed to join, but now also the Moslem country of Turkey.

The German government did not allow the people of their country of 80 million to vote for or against the proposed EU constitution. Only the Parliament voted on this. The man on the street does not agree with these methods. It is expected that in the coming elections in Germany, Angela Merkel will become the new Chancellor. She is against the admission of Turkey into the EU, and thus represents the majority of the Germans. 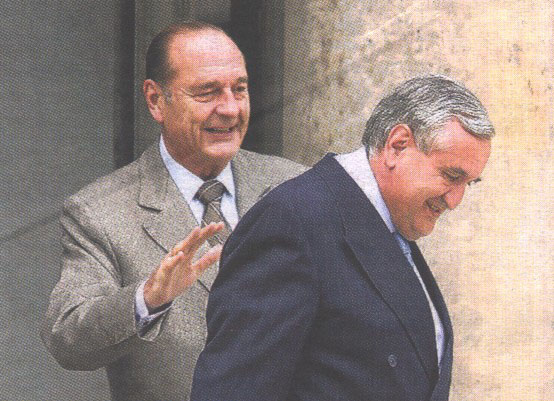 French president Jacques Chirac solved his political problems after the NO of the people: He sent his Prime Minister Jean-Pierre Raftering packing, and himself remained in power.

Difficult Situation for Czechs and Poles

Not doubt, the countries of Poland and the Czech Republic are in a difficult situation. Both were happy that the communist pressure belongs to the past, and now they co-operate with the free world. But on the other side, their people are afraid of United Europe. Leading politicians in the Czech Republic and Poland are not happy with a Constitution for all the member countries of the EU. These freedom-loving countries want to preserve their own culture, their way of life and their traditions.

It is expected that other countries such as England will say NO to this kind of constitution that the French and German politicians wanted.

European Union must listen to its citizens

'The public must become more involved in all the future decisions of the EU, if a consensus is to be achieved on the European integration process', said Parliament's Committee on Constitutional Affairs on June 2, 2005 when it discussed ways for the EU to move forward in the aftermath of the French and Dutch referendum results. A broad majority of the Members of the European Parliament agreed that the ratification process should continue, but that full account must be taken of the negative results.

Although the NO victory in France and in the Netherlands is linked to domestic issues, the Parliament cannot ignore the public's clear message of disapproval of the EU. The German Committee chairman Jo Leinen said "We must reply to questions about the direction of the EU, and our citizens are entitled to have their questions answered." He added, "The ratification process has to continue, because all countries have the right to express their opinion".