A new sculpture by Renate Stendar--Title after Albrecht Dürer 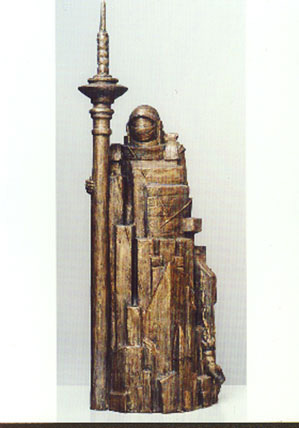 'Knight, Death and Devil', one of the latest work by the Swiss sculptor Renate Stendar. It is pictured in the just-published book about the artist on the occasion of her 85th birthday. To order a copy of the book, contact zavrel@meaus.com

Photo copyright: Renate Stendar
A KNIGHT sits on his throne in his safe castle

And cares for his subjects.

He offers them all the achievements

Of modern progress and vows

To protect those who trust him.

But is he always knightly?

Is he at all times unselfish?

Does not progess also serve him

to manipulate, to gain more power?

Armed to the teeth, he is rigid

And thus unable to act.

His glance through the visor is limited,

Hardly being aware of his surroundings.

He cannot see that behind him is DEATH,

To whom his soldiers are exposed,

His castle is being turned into ruins,

That even cement and steel are passing,

And they cannot protect one from treachery.

He does not see the DEVIL as the arsonist,

Who lies in wait in the underground

To destroy, and who already

Holds in his net the whole world.

He thinks that he is doing battle, but withoout noticing

That since long ago he has become a prisoner under his power.

And he can only hear what is called out to him

from the closest distance, and of that, what is deemed he should hear

and also what he wishes to hear.

In his armour he is blind, deaf and rigid. 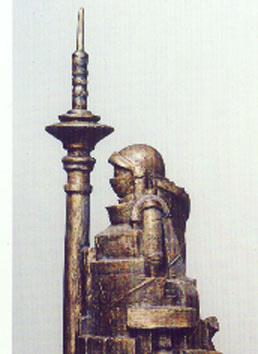 'Knight, Death and Devil' by Renate Stendar. A detail view.