Renate Stendar-Feuerbaum: Sculptures from 2000 to 2005

New color catalog with works from her late period 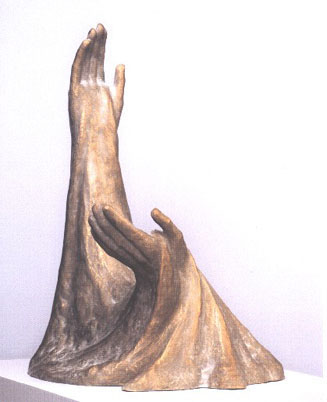 The color catalog (26x21 cm) with a price list of the works for sale costs $ 33 (27 Euros). For information and to order, contact zavrel@meaus.com in USA, and info@europaeische-kulturstiftung.org in Europe.

Renate Stendar-Feuerbaum is an old master of European sculpture. With her total body of work, she ranks in the high tradition of Käthe Kollwitz. And moreover, the sculptor who has been working in Zürich and Hamburg, has also turned to the abstract world of forms in both sculpture and painting. To her symbolically powerful sculptures belong among others "Faith, Hope and Love", "Birth and Death--Death and Birth", Yin and Yang, The Harp of Aeolis, Hope and Expectation.

The author Joe F. Bodenstein writes in the book, which was published in 2005: "In her persevering work, Renate Stendar-Feuerbaum cultivates both forms: Sculpture and painting. The French multi-talent Jean Cocteau had this to say about his much admired drawings of men and various scenes: "They flow out of my hand like letters when one writes. But the shapes are first born in the head and in the heart." A similar confidence of intention is recognized in the works of Pablo Picasso and Georges Braque, and the sculptors Auguste Rodin, Aristide Maillol, Käthe Kollwitz, Ernst Barlach and Henry Moore. This very same aptitude for making forms is also to be found in the work of Renate Stendar-Feuerbaum. 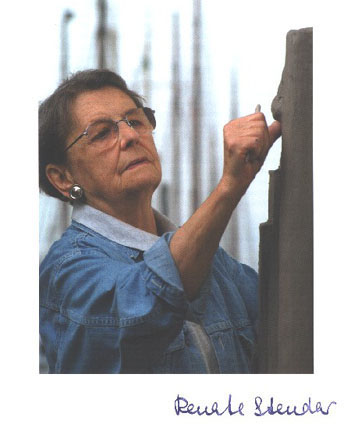 The artist at work in her studio.

The photo shows the creation of a model from clay, as a preliminary step for a bronze sculpture.

The author Dr. Richard Merz writes in the publication: "Renate Stendar-Feuerbaum belongs to those artists who become visible only in their work. The romantic picture of the artist in vogue for the past two hundred years has been that of one who creates only from himself and only by virtue of his own genius. This self-edifying fancy seems quite foreign to her." And later on in the catalog we find out: "The standard elements, depicted in their playful lighness, are as colorful and varied as ever, even in her later works. However, there is one particulat element which makes the artist stand out: The spiritual basis of the plastic shaping. For Renate Stendar-Feuerbaum, her works were always interwoven with a linguistic shaping analogous to the words of poets and thinkers."

The works of Renate Stendar-Feuerbaum are on permanent display at the Museum Europäische Kunst, located in the castle in the town Nörvenich, (near Köln) www.europaeische-kultur-stiftung.org . In the USA, the Museum of European Art in Clarence, New York (www.meaus.com) exhibits the works of this important artist.