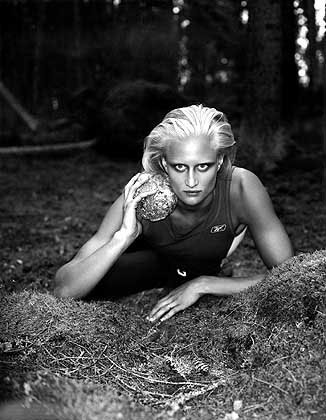 Carolina Kluft is the world's top athlete in 2005. As beautiful and athletic, she recently modeled for a series of photographs illustrating the seven athletic events which comprise the heptathlon.

Helskinki/New York (meaus) The 2005 World Athletics Championships in Helsinki,Finland has been largely ignored by the US media, with the exception of reporting on the US athletes who won medals. About the other great and interesting athletes, not much has been reported in the United States.

Among the many female athletes taking part in the championship was the greatest female athlete in the world--Carolina Kluft from Sweden.

The 22-year old beauty (born February 2, 1983) is virtually unknown in the USA. But she was the Olympic champion in heptathlon in 2004 in Athens, and in 2003 won the world championship.

Although Carolina Kluft has been injured with an ankle injury, which prevented her to perform at her full potential, she still won the heptathlon (seven events) with 6,887 points, beating Eunice Barber from France by a narrow margin in the very last event.

"My heptathlons before have gone very well. I did not have problems with injuries, said Carolina Kluft after her victory. "I did not have problems with winds. And they pretty much went the way I thought. But this time it was really tough to get into the competition and not be in 100 percent. And the high jump was very bad for me. And really I had to push myself to keep doing your best until the end." 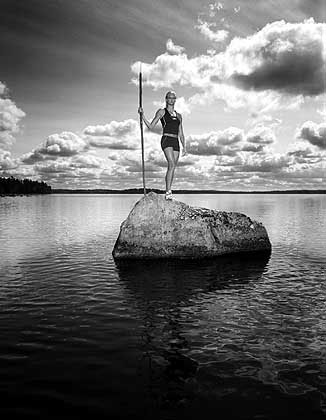 Carolina Kluft modeling the first event of the heptathlon: spear. 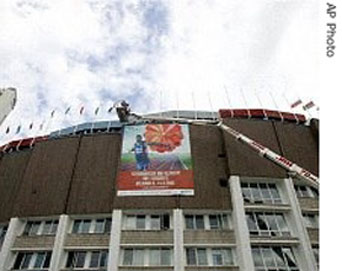 The Olympic stadium in Helsinki, Finland, the venue of the World Athletics Championship which took place in August, 2005.