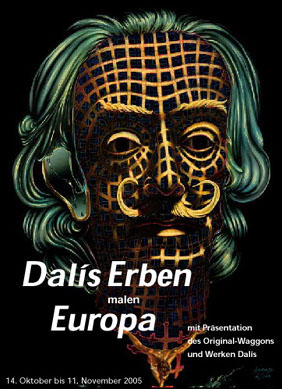 Europe speaks one language: the language of art. The exhibition poster of the traveling exhibition "Dalí's heirs paint Europe", designed by Ludwig Angerer the Elder.

New York/Perpignan (meap) The legendary 'Dalí railroad car' once loaded with surrealistic art works by Salvador Dalí, will soon leave the railway station of Perpignan, France. The destination? Bavaria, for the first ever visit to Germany.

This time, the 'Dalí railroad car' contains the works of 11 high-ranking European artists who paint in the phantastic style reminding of Dalí. "The theme of the exhibition is 'Dalí's heirs paint Europe'. Europe speaks one language, and it is the language of art", said the architect and painter Ludwig Angerer the Elder. He is the artistic advisor for this event. His painting "Hommage á Dalí" is the signature piece for the exhibition, and is also used on the exhibition posters.

Dalí himself once designed the 'Railway station of Perpignan' as the "center of the universe", and immortalized this railroad car in a giant painting, which can be seen in the Ludwig Museum in Köln. So now the town square of Wolnzach, where the railroad car will be exhibited for 4 weeks, will also a 'center of the universe'--in any case, at least the fine arts center of Bavaria.