Anatomy of Man by Wilhelm Tank

The standard reference work of the scientist has remained unsurpassed 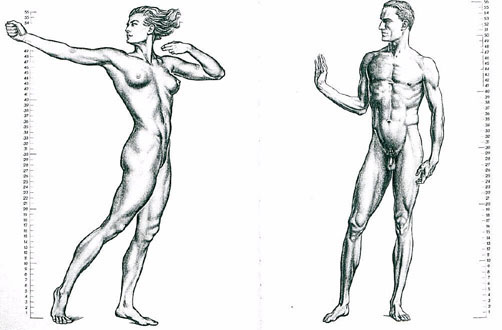 Prof. Wilhelm Tank: The proportions of women and men are described with drawings in his five illustrated books on the anatomy of man.

Berlin (bpb) The publication "Form and Function: An Anatomy of Man" by the Berlin scientist, Professor Werner Tank, has remained unsurpassed as an international standard reference book until today, in the year 2002. Unfortunately, is has been sold out. A new edition is urgently needed.

Professor Tank researched for over 30 years. His anatomical main work was published in the former East Germany in 1957. His co-worker and friend, Professor Dr. Ortwin Müller in named in volume 5. Müller taught in East Germany according to the scientific findings of Professor Tank.

The quality of this 'Anatomy of Man' lies in the fact, that it was composed purely in a scientific way, and also on the basis of practical experiences. Tank uses clear language. It is understandable to everyone. The illustrations are by the author. For some of them, his son Eike Tank and his wife stood model. Tank is the leading painter of anatomy of the 20th century in the German-speaking countries.

What is positive in his work, is that Tank has not been influenced by political and racial prejudices. He presented the correspondence of the body functions of all the developed races, and stresses the original equality of the human living being. 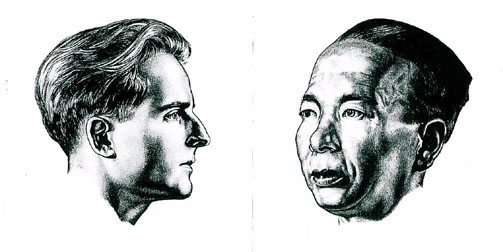 The beauty of a portrait is seen in this anatomic drawing. Left: The white man, as he lived in USA and Germany. On the right, is shown the face of the "yellow man", a Chinese. Prof. Tank valued white, yellow and black people as equal human beings of this world. The German scientist was already during World War II against racial discrimination.

In the texts by Tank, one can see clearly the cosmopolitan viewpoint of the scientist and artist. He does not present the "white man" as the crowning achievement of creation, and does not play off the whites against the blacks. Tank speaks of the "colored human groups". He examined the light-coloreds (whites), the yellow and the blacks as equals. Thus in Tank's 'Anatomy of Man' appear also Africans, Asiatics (India, China) and mixed races..

In his drawings, which present the unique qualities and beauty of the blacks, Tank shows the same artistic attention that he gives to the whites. The new knowledge achieved by Wilhelm Tank formed the basis on which, in the past decades, other, new anatomy books were published--more colorful, attractive, and entertaining. But a survey of the young people in universities showed that the young men and women still would rather go back to the "clear and precise representation" of Professor Tank, if these books were available in adequate quantities.

The books on anatomy by Tank have proven to be also very helpful for artists in the classical tradition. The sculptor Arno Breker, who was friends with the older Tank, knew the works of the leading anatomical painter of his time. Breker turned his own knowledge of anatomy into incomparable sculptures.

Tank himself named as those who inspired him for his scientific-artistic work Michelangelo, Albrecht Dürer--and later also the sculptors Auguste Rodin and Aristide Maillol, who together with Charles Despiau and the young Arno Breker represent a group of sculptors, whose artistic work centers on the depiction of the human being.