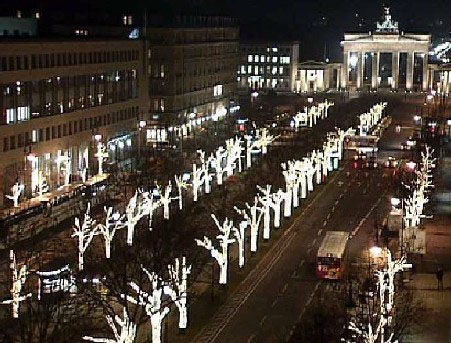 Linden-Lighting in Berlin. Michal Jackson looked down from his suite in the historical Hotel Adlon on Berlin's famous, magnificent boulevard 'Unter den Linden' on the very first Christmas illumination of this avenue. Two sponsors, the publisher Stephan Vogel and the cell-phone service provider Vodafone, made this fascinating event possible. The current mayor of Berlin, Klaus Wowereit praised them: "An exemplary event."

Berlin (bpb) Michael Jackson was enchanted: from his suite on the 3rd floor of the Hotel Adlon, he was able to see the first illumination of the magnificent boulevard 'Unter den Linden." This fascinating Christmas ellumination was made possible by the cell-phone service provider Vodafone D2 and the Berlin publisher Stephan Vogel. The event is a project of the initiative 'Boulevard Metropolis', which connects the leading capitals of the world through various events.

Michael Jackson has come to the German capital to receive the "Bambi Award." This Award, in the forms of a gold-plated sculpture of a small baby-reindeer is for Germany just what is Oscar in Hollywood. Jackson received on Thursday, November 21, 2002 the "Millennium Bambi". The tennis star Boris Becker handed over the oldest German media award of the Burda Publishing company. About 1,000 guests of honor, who gathered in the Estrel Convention Center, greeted this with enthusiastic applause.

The honor for the 44-year old popstar with the boyish, shy voice was the high point at the end of the two-hour event. Jackson put on glasses, and read his thank-you. He appealed for peace in the world, and for support of needy children. Similarly as before him the US presidents John F. Kennedy, Ronald Reagan, George Bush and Bill Clinton, he said a sentence in German. It said, "Berlin, I love you". And then added, "I love Germany. You have a very special place in my heart!" 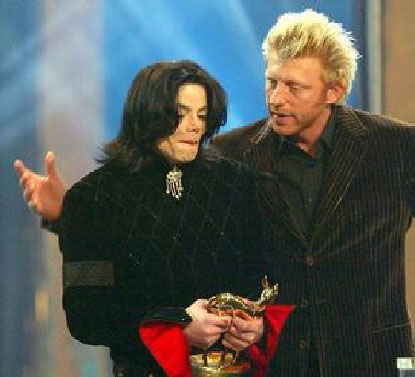 Michael Jackson receives the Bambi Award from the hands of Boris Becker. The popstar has come with his children to Berlin, and stayed for several days.

At the Bambi Award were also honored other men and women artists. To them belonged also the former and present Hollowood actors: Maria Schell, Maximilian Schell and the young American actress and Oscar winner Halle Berry. The new 'James Bond-girl' had won already in 2001 at the Film Festival 'Berlinale' the 'Silver Bear'. Maria and Maximilian Schell received standing ovations.