A stirring idea for friendship and international understanding 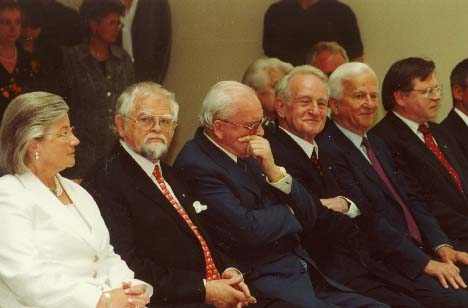 Berlin. The streets are international symbols in the whole world: the "Avenue des Champs-Elysées" in Paris, the "Fifth Avenue" in New York, the splendid avenue "Unter den Linden" in Berlin, located between the historic Brandenburg Gate and the cultural area Berlin-Center. They are the 'Boulevards Metropolis'.

Over the centuries, great historic events have taken place there, which have also in our times moved and touched all people. And there is one thing that all these magnificent avenues in USA, France and Germany have in common: in their hearts, the people who live there have kept their love and loyalty to the historical places until today. And that goes not only for the native people, but for the tourists visiting from other nations as well.

And thus these places are important starting points for the dialog of the people of all the countries that are based on the common democratic principles. The European Art Foundation supports the idea that culture, politics and business should all act together to join these famous streets into a unique network, into a special community.

That means: at these places, various cultural and social events and spectacular happenings of public interest will be arranged. Among the projects to be offered are: musical events, art exhibitions, outdoor theater, designer shows, readings by authors, and much more.

The engagement of politicians is very important

The engagement of politicians for this democratic idea is very important. With this the initiators give the women and men of politics the opportunity to present themselves to the public, especially at the various activities of broad international interest. Women in politics and statesmen should participate especially in activities benefiting the public and in various special benefit events. That goes for local, as well as for global themes. Each particular project will be discussed in advance with the invited personalities.

In the service of public interest

The initiative 'Boulevard Metropolis' organizes and coordinates measures and actions that serve the ideals of the multinational and multicultural partnership. The offerings of the initiative must have the largest possible publicity and a wide participation of the citizens.

The actions serve exclusively the common goal to serve the citizens and the public interest.

The office of the initiative, located in the very heart of Berlin, has great symbolic strength not only because of its location as 'gateway' between East and West.

No other city in the world today finds itself in the midst of such powerful upheaval and spiritual and social awakening as Berlin. This dynamic is an additional, positive symbol for the movement that will be set in motion through 'Boulevard Metropolis.'

The streets that find themselves under the common roof of 'Boulevard Metropolis' are 'national monuments' with international attraction. In order to bring this importance even more into the public consciousness, especially those persons living in these cities who are dedicated to the public service must become actively engaged.