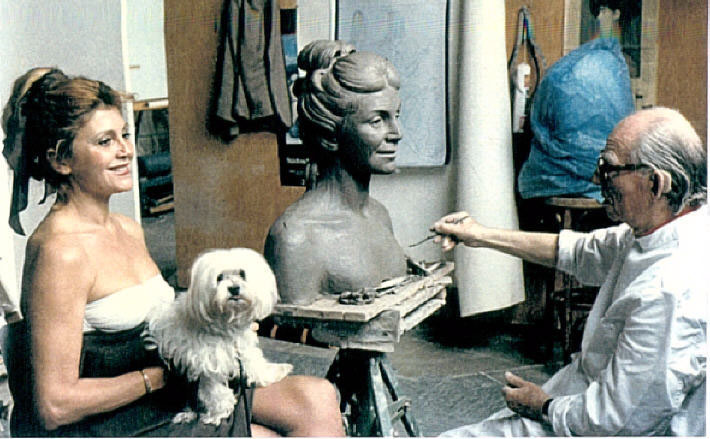 Madrid/Bonn (bpb) Baronness Thyssen-Bornemisza has become, aftert the death of her husband Baron Thyssen-Bornemisza, a world-renowned guardian of art. In this she overshadowed the widow of the prominent museum founder Peter Ludwig, as well as Princess Gloria von Thurn und Taxis, who concentrates her efforts on the management of the family estates and their art treasures.

The most important decision of the couple Thyssen-Bornemisza was to bring together their collection to Spain. Negotiations with the German government in Bonn under Chancellor Helmut Kohl and his minister in charge of culture, Friedrich Zimmermann, came to nothing due to the unability of the Germans to come to a decision. Also England, Japan and the USA dropped out in the end.

On the other hand, the Spanish Royal House realized the significance of the collection, which according to experts, is a close second to the collection of Queen Elisabeth II. On April 7, 1988 Baron Thyssen-Bornemisza and the Spanish Minister of Culture Javier Solana signed the document, according to which the first 775 paintings could be exhibited in Spain for ten years. The Spanish King Juan Carlos and Queen Sophia participated on October 8, 1992 at the the dedication of the Thyssen-Bornemisza Museum in Madrid. And already on June 21, 1993 the collection was acquired by Spain. In the meantime, an addition to the museum building is being constructed, with opening scheduled in 2003.

The Baronness herself has become a museum object. The Museum of European Art at the Nörvenich Castle has accepted into its official collection an exemplair of her bust, created by Arno Breker. It comes from the private collection of the sculptor, who died on February 13, 1991. The couple Thyssen-Bornemisza were often guests of Breker in Düsseldorf.

"The bust of the Baronness is an excellent contra-piece to the portrait of Princess Gloria, which was also created by Arno Breker", says the Museum director John Gilbert Bodenstein. Both portraits can be seen in the museum.

Beautiful, smart and full of visions

Baronness Carmen Thyssen-Bornemisza was born in 1943 as María del Carmen Cervera Fernández de la Guerra. She was first married in 1965 to the Hollywood star Lex Barker (* May 8, 1919, Ý May 11, 1973). In 1985 she married Baron Thyssen-Bornemisza, who adopted her son Boria

According to her own words, her interest in art was first awaken when she met Baron Thyssen-Bornemisza. Soon afterward she herself also began to collect art. But she stresses that without her husband and 'Maestro", this understanding and love of art would have never developed. She continues to manage the collection according to his original concept, in which are included both old masters, as well as Classical modern art with paintings by Picasso, Braque and Chagall. In Bonn, the city's Bundeskunsthalle (German Art Hall) has arranged an exhibition "From Brueghel to Kandinsky" to honor the art-collector couple in 2001. The works of art came on loan from the Thyssen-Bornemisza Musem. The active Baronness is an inspiring example that beautiful women can be smart, creative and have vision.

According to experts, with the death of Hans Heinrich Thyssen-Bornemisza in 2002, we have lost the last great collector in Western art history. Nobody today would have enough money to put together a collection of this level.