Bill Clinton was celebrated in Berlin as a friend

Unveiling of the Brandenburg Gate--Meeting with Schröder, Rau and Kohl 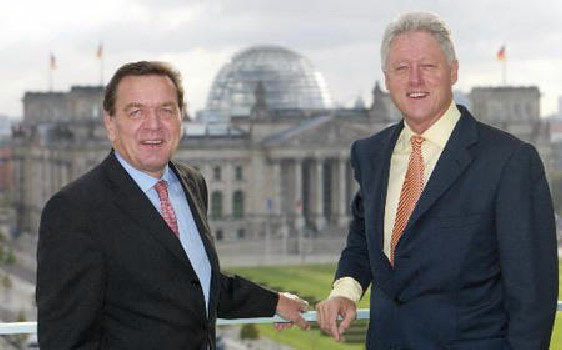 German chancellor Gerhard Schroeder with former US President Bill Clinton (right) on the balcony of the Chancellery on October 4, 2002 in Berlin. In the back can be seen the German Parliament building Reichstag . Schroeder invited Clinton for breakfast in the Chancellor's apartment at the top of the Chancellery.

Berlin (bpb) The former US President Bill Clinton was the guest of honor in Berlin on October 3, 2002 on the occasion of the 12th anniversary of German unification. The German Chancellor Gerhard Schröder, who has angered the US President George W. Bush by his opinions and attitude toward the question of the policy toward Iraq, appeared to be especially friendly towards Clinton. The American was celebrated by Berlin's people like in the old times, when Helmut Kohl was still the German Chancellor.

Clinton came to the German capital in order to take place at the unveiling of the Brandenburg Gate. It was for two years under renovation. The costs amounted to 3.9 million Euros ( $ 3.8 million). At the unveiling on October 3 in front of some 100,000 Berliners, Clinton said that the Branbdenburg Gate is a "Gate of Hope" for all those who long for liberty, justice and peace. "Today it is a genuine symbol of unity", said Clinton to applause.

The Brandenburg Gate was build in the years between 1788 and 1791. It has survived the highs and lows of history. It has seen the victory marches of the German Kaisers, Adolf Hitler and the National Socialists, it lived through the Soviet "Red Army" and the destruction of Germany at the end of the war in 1945. It also survived the communist state power of East Germany and was during the Cold War a new symbol of confrontation between democracy and the totalitarian states of the East block. The US President Ronald Reagan appealed in a historial speech to the former Soviet leader Michael Gorbatschow to open this gate. Bill Clinton was after the fall of the Berlin Wall in 1989/90 the first US President to walk through the historical gate. 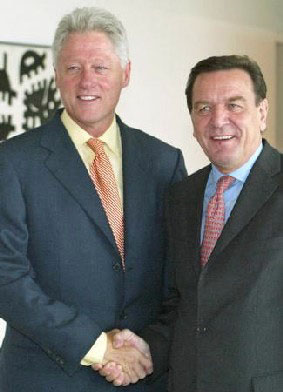 Bill Clinton and Gerhard Schroeder show a great harmony in front of the photographs: the German-American friendship is an important bond. 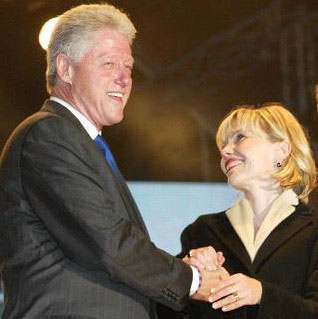 Bill Clinton was also very friendly greeted by the wife of the German Chancellor, Doris Schroeder-Koepf. The "First Lady" among the wives of the Berlin politicians, she is engaged in helping socially disadvantaged children.

However, on the occasion of the 12th anniversary of German unification Bush sent a message of congratulations to the German President Rau. In that way he renewed official contact to Germany since the elections in September. Bush did not congratulate the German Chancellor to his re-election.

Bill Clinton came without his wife Hillary Clinton to Germany. He had a wide-ranging program and was not able to keep all the appointments.