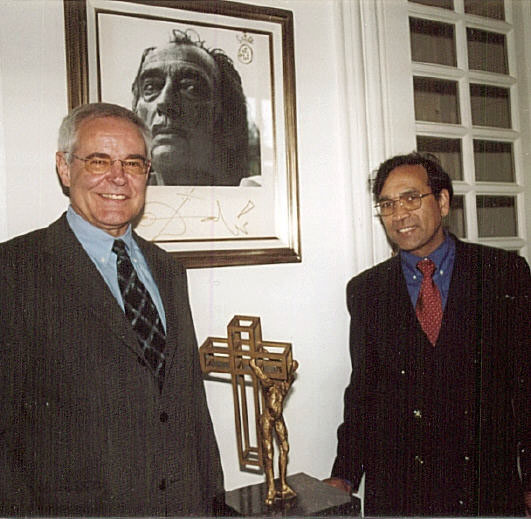 The president of the European Art Foundation, director John G. Bodenstein (right) and Professor Dr. Hermann Schäfer, president of the foundation 'House of German History' in front art objects which are being prepared for the exhibition on the occasion of the 100th birthday anniversary of Salvador Dali in the year 2004.

Berlin (bpb) The European Art Foundation has set up an international Dali-Committee, which has the task of making preparations for exhibitions on the occasion of the 100th birthday anniversary of Salvador Dali. To the panel belong representatives from art, culture, museums and institutions in Germany, France, USA, Japan and Israel. The sculptor Kurt Arentz was appointed as the spokesman for artists. Questions of international relations are the responsibility of Consul B. John Zavrel. The Dali-Committee has also the task to find sponsors from business and industry, who are interested to sponsor not-for-profit events in the Dali-Year 2004. More information can be obtained from: zavrel@meaus.com and from the Foundation at: info@europaeische-kultur-stiftung.com

The Dali-Committee works independently from the Dali-Commission organized in Spain under the patronage of the Spanish King Juan Carlos and Queen Sophia, as well as the "Gala and Salvador Dali Foundation'. The Spanish initiative is primarily interested to organize special attractions for tourists in the city of Figueras, together with the Dali Museum during the Dali-Year.