In Praise of the Goddess: The Devimahatmya and Its Meaning

"This is the supreme secret, and it is said that it should NOT be divulged. But look how devoted you are! There is nothing I would not tell you, O king." 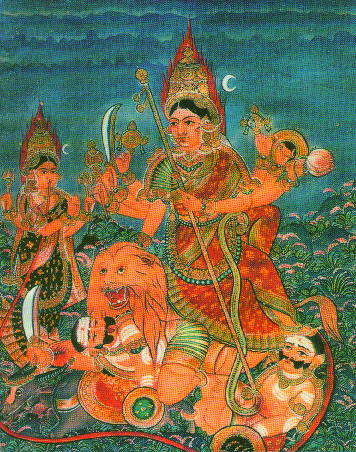 Cover illustration of the book: "Mahádeví and Káliká". Mahádeví (Durgá), astride her lion, engages in battle with the demon brothers Sumbha (Ego) and Nisumbha (Attachment) while Kálí looks on, drinking their blood. Mysore, ca. 1900 CE.

'Devímáhátmya' (The Glory of the Goddess) is a spiritual treasure, written down some 1,600 years ago in India. And it remains the central text for worshippers of the Divine Mother. This poem of 700 verses is recited daily in temples in India. Part myth and part philosophy, part narrative and part hymn, it is a spiritual classic that addresses the perennial questions of our existence: What is the nature of the universe, mankind, and divinity? How are they related? How do we live in a world torn between good and evil? And how do we find lasting satisfaction and inner peace?

Cast as the narrative of a dispossessed king, a merchant betrayed by the family he loves, and a sage whose instruction leads beyond existential suffering, the Devímáhátmya teaches through a trilogy of myths. The sage's three tales are allegories of outer and inner experience, symbolized by the fierce battles the all-powerful Devi wages against throngs of demonic foes. Like the battlefield of the Bhagavadgita, the Devímáhátmya's killing grounds represent the field of human consciousness on which the drama of individual lives plays out in joy and sorrow, in wisdom and folly. The Devi, personified as one supreme Goddess and many goddesses, confronts the demons of ego and dispels our mistaken idea of who we are, because paradoxically, it is she who creates the misunderstanding in the first place, and she alone who awakens us to our true being.

Our ancient Aryan ancestors, whose beliefs constitute the text, found enchantment in nature's bounty, faced terror in its destructive force, and revered both aspects of their experience as manifestations of the Great Mother. As relevant today as ever, the Devímáhátmya has the power to reawaken us to a sense of wonder at the surrounding universe through a dazzling, integrating, and ultimately liberating vision of reality.

A brilliant and enlightening edition with a vast commentary has been recently written by Devadatta Kálí (David Nelson), an initiate of Swami Prabhavananda, who was also the spirutual guru of Christopher Isherwood and Aldous Huxley. The book's title is "In Praise of the Goddess: The Devímáhátmya and Its Meaning".

A comprehensive historical introduction prepares the reader for a meaningful experience of the Devímáhátmya. The full commentary, the first ever in the English language, reveals the Devímáhátmya as the spiritual classic that it is, a universal allegory of human experience and a guide for the inner life. Additionally, this edition contains eight other texts closely associated with the Devímáhátmya, for the first time presented with English commentary. Also a glossary of Sanskrit terms is included. And as a special treat for the Sanskrit scholars among us, all the texts are included not only in the original Sanskrit script, but also transliterated, making it possible even for relative beginners in Sanskrit to recite the original text.

Swami Veda Bharati, the leading disciple of the legendary sage Swami Rama of the Himalayas, sometimes makes this point in his remarkable lectures on the philosophy and science of yoga and meditation: "If a person has never tasted sugar, how do you explain to him what it is? ... You can't do it in words. You can only explain by giving him a piece of sugar to taste."

In the same way, it is not possible to give a proper idea of this remarkable translation and commentary by my words alone.

Therefore, to get the "flavor" of the text, here is a small sample of the translation and two (shorter) footnotes. This is how the famous, most sacred part of the scripture begins in Chapter 5:

The Deví's Conversation with the Messenger

(5.2) "Long ago, grown arrogant with power, the asuras Sumbha and Nisumbha seized Indra's sovereignity over the three worlds and his share of sacrifices.

(5.3) In like manner they usurped the authority of the sun and the moon, and that of Kubera, Yama, and Varuna--the lords of wealth, death and the ocean.

(5.4) They seized the wind god's power and Agni's function. The gods were defeated, deposed, and driven out.

(5.5) Stripped of their powers and cast our by those two great asuras, all the gods rememberred the invincible Deví.

(5.6) 'She granted us a boon, saying, "Whenever you remember me in times of distress, from that very moment I will put and end to all your worst calamities."

(5.7) With that in mind, the gods went to Himalaya, the lord of mountains, and there praised the Deví, who is Visnumaya.

(5.12) Salutation always to Durga, who takes us through difficulties, who is the creator and indwelling essence of all, who is right knowledge, and who also appears dark as smoke.

(5.1) The bíja klím signifies the Deví's essential nature as pure bliss (ananda). As noted previously, the Tantric bíja mantras that open the three caritas--aim, hrím, and klím--equate the Divine Mother, or Sakti, with saccidananda--infinite being-consciousness-bliss--expressed by the Vedic bíja mantra Om. Thus the three caritas of the Devímáhátmya reflect in turn the Mother's three essential qualities.

(5.8) This verse announces the Aparajitastuti (Hymn to the Invincible Deví," 5.9-82). This hymn is a great celebration of the Deví's immanence, praising her various aspects from the formless abstraction of supreme power to specific forms assumed by that power. Thus, every form offers the possibility of a tangible way to relate to the Divine. Although celebrating her immediacy, the Aparájitástuti is the Devímáhátmya's only hymn to address the Divine Mother in the third person. Perhaps the more reverential tone is intended to impress upon the Deví's awe-inspiring majesty as she reveals herself in and through her creation.

The thinking behind this hymn shows a spiritual kinship to the ecstatic fourth, fifth, and sicth chapters of the Svetásvataropanisad, another outpouring in praise of divine immanence, which beholds divinity as fire, the sun, the moon, and the starry firmament; as woman, man, youth, and maiden; and as a host of natural images such as the dark blud butterfly, the green parrot with red eyes, the thundercloud, and the seasons. According to the Upanisad, the source of this creation is the blissful one (siva), who assumes various forms (anekarúpa) and remains hidden in all creatures (sarvabhútesu gúdha) (SU 4.14-15), having brought everything forth from its own nature (svabháva) (SU 5.5).

The Aparájitástuti is a treasury of divine names and epithets. Many of them individually carry a host of associations and ideas, and the English language lacks the equivalent terms to express the fullness of the Sanskrit original.

While the traditional Sanskrit commentaries seek to enlighten by arguing the fine points of a text from a particular philosophical position, Devadatta Kálí's commentary is a bit different. It is meant for readers who may have little or no previous knowledge of Hindu thought. It draws broadly on diverse sources of information that help reveal the Devímáhátmya's deeper levels of meaning.

On one level, Devímáhátmya is an allegory of the spiritual journey; on another, it is a blueprint of the soul. Much of the commentary is written in a simple language, aimed at explaining the practical application of the Devímáhátmya's teachings.

Making no claim to be a definitive interpretation, yet this commentary comes close to it. But above all, it is a guide to what can become a voyage of discovery. The Devímáhátmya is no ordinary book. It can serve us equally in times of personal difficulty and decision, in moments when we look in rapt wonder and beauty around us, or in those indescribable moments when the profound quiet of holiness reveals its presence.

The sage Medhas does not divulge the 'supreme secret' until the very end of this sacred scripture. But for that, one has to purchase and read the book. But even that will be only the first, tiny step toward uncovering the mystery.

The deepest meanings of this great poem make themselves known only to a deserving Disciple only through direct experience, and such immediacy can only come from within, after many years of devoted, one-pointed study and practice under the guidance of an accomplished Master, and selfless, skillful and loving service to the Lineage.

... and there is nothing such a Master would not pass on to his most deserving disciple, even in our modern times.

The book "In Praise of the Goddess: The Devimahatmya and Its Meaning" by Devadatta Kali is available on Amazon.com for about $16. No doubt, this is one book that every serious seeker on the spiritual path will tremendously enjoy, and will continue to return to this rare fountain of wisdom and inspiration for years to come.