The great wife of a famous inventor was honored 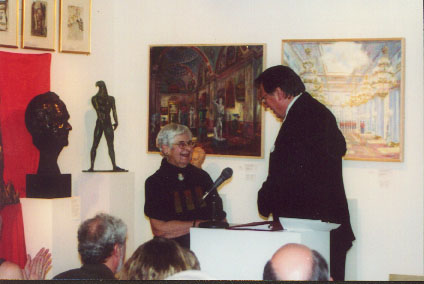 Paris. The Order of Alexander the Great for Art and Science has honored Eleanor Greatbatch with the membership of this international society. The award ceremony took place in the Museum of European Art in Clarence, New York. The new "Knight of the Order" is the wife of Dr. Wilson Greatbatch, the American inventor of the implantable pacemaker.

The Secret Council of the Order in Paris declared: Mrs. Eleanor Greatbatch is honored for her many-sided merits in the free society. She was and is an outstanding personality at the side of an American inventor who made great contributions in science for the benefit of all mankind. On this road she has walked side by side with her husband.

The Certificate was handed over by the Honorary Consul of the Czech Republic, B. John Zavrel. He said in presence of invited guests: "In Eleanor Greatbatch we honor a lady, a mother of five successful children, and the wife of a scientist, a very honorable man and a great American." Zavrel compared the life of Eleanor Greatbatch with the true love of the First Lady Nancy Reagan with Ronald Reagan, standing together in good times and in bad times. "You, Mrs. Greatbatch and your husband--in both life and work--are an example, an ideal for the younger married couples and the young generation of today in general."

The consul further pointed out the cultural and charitable engagement of Mrs. Greatbatch.

In the history of the Order, under the patronage of the late Paul II., the King of the Hellenes, not many women were admitted into the Order. In the past, they were mostly royalty among the members, such as Princess Victoria Louise. She was the daughter of the last German Kaiser--and therefore the grandmother of the present Queen of Spain.

Since the Order was modernised by the French writer and Alexander the Great biographer Roger Peyrefitte in 1990, it become more common to welcome also Ladies in the Order. Among the lady members is Professor Uta Ranke-Heinemann. She is the daughter of the late German President Gustav Heinemann, and the first professor of catholic theology in the world. Among the Jewish members of the Order is the writer Ruth Zucker from Israel. She was honored for her merits for better relations between Germany and Israel, as well for better understanding between the Christian and the Jewish society.