The officer lives a very private life--old friends congratulate him 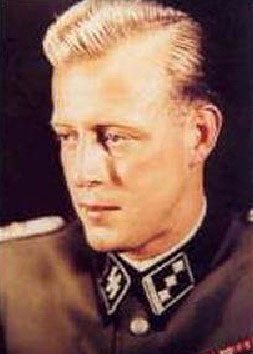 Berlin (bpb) One of the greatest eyewitnesses of the Third Reich celebrated his 85th birthday: Otto Günsche. He was born on September 24, 1917. Günsche was the officer in the Reich Chancellory, who received from Hitler himself the order to burn his body one day. This actually happened on April 30, 1945. Among other things discussed, Günsche confirmed to the writer Joe F. Bodenstein in an interview that he did actually did set afire the "body of the Führer". At first Hitler's secretary Bormann tried to start the fire with a sheet of paper. Finally Günsche threw a burning bunch of clothes on the body, which was previously soaked in gasoline.

Wünsche left the Reich Chancellory on the same day. To the people in his group leaving the bunker also belonged Adolf Hitler's private secretary Gerda Christian. As she reported to the writer, the breakout from the Chancellory succeeded through a tunnel of the Berlin underground metro from the Voss-Strasse to the Station on Friedrichstrasse. There the two long-time companions in Hitler's service said good-bye to one another. Otto Günsche finally fell into Soviet captivity and survived years of captivity in Russian concentration camps. 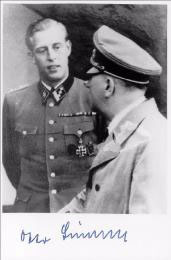 Hitler's personal adjutant Otto Günsche with his boss. After 1945 Günsche survived Soviet concentration camps in Siberia. During the government of Konrad Adenauer he was released to return to West Germany.

Gerda Christian escaped from Berlin into the western American zone. There she was captured by the CIA and interrogated for several days. The freeing of Günsche happened thanks to the initiative of the first post-war German Chancellor Konrad Adenauer. After hard negotiations Chancellor Adenauer finally succeeded to bring back home to Germany thousands of German soldiers from captivity in the Soviet Union.

Günsche was known as a blameless young officer. There were no accusations against him personally. After regaining his freedom, Günsche became emplyed in the industry in West Germany. In business dealings, he was highly respected. He was known as a man of honor. Gerda Christian belonged up to her death to the circle of his friends. The formed adjutant of the Führer has refused, in spite of greatest financial offers from Germany and abroad, all offers to write his own memoires that would be critical of the National Socialist times or Hitler.