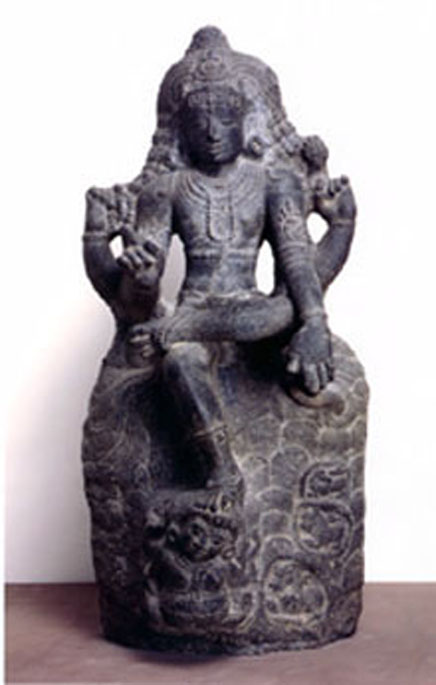 Please accept this small gift of the picture of a sculpture on the occasion of celebrating the Full Moon of the Guru for the current year. This particular sculpture of the 11th century is from Victoria and Albert Museum, London. I have recently seen two other versions in the Musee Guimet in Paris. However, many spiritually live ones adorn places of honour in the temples of India.

This particular figure of the Guru is known as Dakshina-murti, that is

1. He grants skill and expertise (daksha) in the righthanded Path, and

2. Receives the offerings (dakshina) of gratitude and appreciation from the disciple,

3. as He sits on the Northern mountain (the Himalaya), facing South (dakshina).

In its iconography, the cosmic Guru-Shiva sits on the mountain top and holds various aspects of power and knowledge.

In one hand we see rudrakha mala of perhaps 27 beads on which a-japa japa, unrecited recitation, is maintained.

One hand, partly in chin-mudra or jnana-mudra, the gesture of the knowledge of Consciousness, holds flaming sacred fire of knowledge that burns all dross and accepts offerings of the devotee's beautiful thoughts.

One hand is in the upa-desha-mudra, gesture of instruction with the index finger pointing out.

One hand is open in varada-mudra, the gesture of granting a gift or a boon. The left leg is crossed over onto the right thigh as the Guru sits comfortably.

An interesting feature of the icon is that the right foot rests on the head of a half bent figure. The figure has eyes closed in stupor, has an unbalanced body, is deformed with a big belly. In some other icons of dakshinamurti the right foot rests on the back of the figure that lies curled up face down. This feature is similar to that of the figure on the back of which Shiva Nataraja, the King of the Cosmic Dance, dances.

This bent and stupefied figure is known as apa-smara,, the anti-thesis of smrti, memory, remembrance, concentration, mindfulness. Apa-smara is our cosmic and individuated forgetfulness and lack of mindfulness. Shiva-guru in the form of Dakshinamurti, has put his foot down on its head (or on its back).

Looking like the mount Kailasha (as we see his matted locks), whose form is constituted of

(a) granting the righthanded skill, and

b) the disciple's offering of the gifts of gratitude

crush the head of our inattentiveness, ignorance, cosmic forgetfulness, weakness in concentration and our absence of mindfulness,

on this day of Guru-purnima.

May the Full Moon of the Guru knowledge shine and manifest in our very minds and, as an offering of gratitude may we aid in the illumination of many souls through our disciple-consciousness.

May we learn to surrender our deformed minds filled with apa-smara so that they become pedestals for the right foot of the God-Guru.

With immense love for our Gurudeva Swami Rama of the Himalayas and his perennial lineage, and blessings for you,