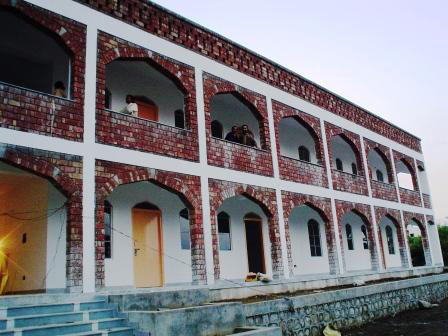 Swami Veda Bharati arrived at Delhi on November 6, 2003. On November 7, he escorted a group of 12 from Holland to Rishikesh. The Group included Usha who had designed the entire Sadhaka Grama complex, and was about to see it for the first time with her and Atem's two lovely children. Atem has bee a frequent visitor during the construction phase to watch over the process and help it materialize.

It was wonderful to watch Usha's delight in seeing what we called her third child (actually conceived before her first one!)

Also it was gratifying to see that the second phase of 32 rooms, a kitchen and dining area and meditation study hall have been just about completed, thanks to the charity and sacrifice of one single family of devotees from Delhi and the supervision of Dr. Prakash Dixit, the executive director of SRSG.

The new complex will house the Gurukulam students as well as (Swami Veda still owes $250,000 for this phase). Much work, such as landscaping is yet to be done. 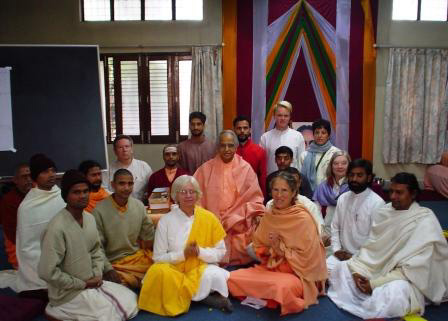 The first study session of the Gurukulam was held on November 8, 2003. We have started with three Swamis, nine novitiates of varying degrees, and three students from the USA, total 15 students.

Some more have been given advance admission: They will arrive at different times from February to October 2004.

Those who have pledged to serve as faculty for one, two months each year are:

Most Advanced teacher of Aikido and Yoga

OFFERING ONE MALA of the Maha Mritunjaya mantra

In honor of 60 years (come 2007) of travel and teaching, Swami Veda's students throughout the world are doing one mala a day For +_ 1008 days (beginning whenever you have received this message) to complete in 2007 (for those that can attend) with sacred fire offerings in Rishikesh.

Swamiji is sitting on special days at specific times and invites all to join him at those times in their time zone. Times may be confirmed through your local center, the Meditation Center or the websites. 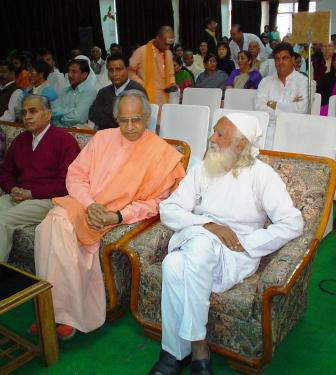 A committee of eminent persons headed by Justice Venkatachaliah, past Chief Justice of the Supreme Court of India, selected Shri Sundarlal Bahuguna for the 2003 Award.

Shri Sundarlal Bahuguna is one of the few remaining "living Gandhis" of India. He is a wEll known ascetic-environmentalist who founded the CHIPKO (which means KLING!) movement. As he tells it, his inspiration for this movement came from an illiterate (what's an illiterate?) village woman of the Garhwal Himalayas. When the loggers came to cut the forests, she hugged the trees to protect them. Shri Sundarlal Bahuguna picked up the idea, organized the villages throughout the region. When the loggers came, they were given the traditional hospitality of the mountain people. But when they went out to cut the forests, the men, women and children went out en masse and hugged the trees, saying "you would have to cut us down with the trees". No violence, no enmity, only the Gandhian style positive and loving action.

Sri Sundarlal Bahuguna has similarly led many other movements, not to protest, but to venerate the Mother: Mother Nature. He has fasted for months at a time till the authorities and vested interests would compromise.

Every year HIHT commemorates 13th November as the day Gurudeva Sri Swami Rama dropped his body in 1996. This year was the 7th anniversary of the same. At this occasion Shri Sundarlal Bahuguna was honoured with the award.

Swami Veda Bharati felt it a special privilege to receive, escort and sit by such a saintly person during the ceremonies. 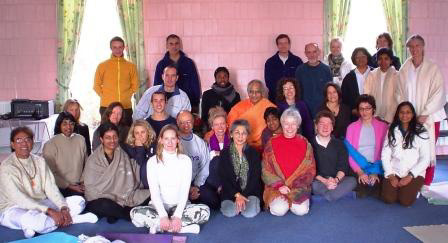 Meditation group in England, with Swami Veda in the center.

Its success was engendered by the primary efforts of Jenny Pretor-Pinney, direct of The Yoga Place. 35 participants enjoyed the 3 hour session in which Jenny and Andrew Henley (Barrister-at-law by profession, an alumnus of the Rishikesh ashram) introduced the Himalayan Tradition. Tejaswini (yoga teacher, a member of SRSG community) led an hour hatha session and Andrew Henley guided the meditation.

Any inquiries about the group may be sent to Andrew Henley: akhenley@globalnet.co.uk or andrewhenley56@hotmail.com