The photographer of Dali, Helmut Newton died on the anniversary of Dali's death

Mysterious death of a Jewish star-photographer from Germany 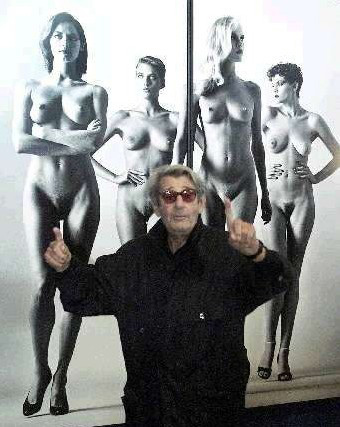 Helmut Newton in front of a monumental photomontage with some of his beautiful female models.

Berlin/New York/Los Angeles (bpb) The star-photographer Helmut Newton died on January 23, 2004 in Hollywood in a car crash. The end of the 83-year old German-American is mysterious. According to magazine reports, it is assumed that Newton died of a heart attack. During the attack he fell forward while driving his car, pushed the gas pedal and crashed into a wall.

Helmut Newton was not only the photographer of beautiful women. He was also the photographer of Salvador Dali. "Newton has taken masterful portraits of Dali just shortly before his death: in a princely robe, with a silk tunic, but already marked by death", said the Dali expert Detlef Lehmann. The curator of the Dali Archives of the European Art Foundation knows this: "Newton was the only photographer that Dali allowed to photograph him also with the life-giving plastic tube going into his nose. A shattering portrait."

The accident of the 83-year old Jewish master photographer from Berlin brings up unexpected questions, according to the Israeli graphologist and author Ruth Zucker. "Newton has followed his esteemed friend Dali exactly 15 years after Dali's death", said Zucker, who belongs to the board of the European Art Foundation.

Dali died on January 23, 1989 in Spain due to old age. Newton crashed with his car in Hollywood exactly 15 years later. A unique coincidence?

Ruth Zucker, who as astrologer and consultant to heads of state and chiefs of governments enjoys worldwide respect, commented on the surprising coincidence of the date of death: "It remains a mystery, why Newton left his life just on the anniversary of Dali's death. Such occurances, which cannot be planned, strengthen astrologers in their knowledge that fateful events can be seen in their present form in the constellations of the stars, and can be shown in the resulting horoscopes."

The European Art Foundation and Boulevard Metropolis Berlin wanted to exhibit the Newton photographs of Salvador Dali in the German capital on the occasion of Dali's 100th birthday anniversary. "We shall definitely exhibit the photograph, authorized by Dali, in May 2004 in the Museum of European Art at the Nörvenich Castle near Köln", says the President of the Foundation John G. Bodenstein. The Taschen Publishers in Köln has published a volume of Newton's photographs.

Police report about Newton's last minutes in his Cadillac

Eye-witnesses and the Los Angeles police report about the last minutes of Newton's life. Newton is said to have lost control of his Cadillac while leaving the parking area of the hotel Chateau Marmont on the famous Sunset Boulevard. The car crashed into a wall on the opposite side of the street. Police reported that Newton left the parking area of the hotel around noon on Friday. According to eye-witnesses, he sat alone in his car. Suddenly the car strongly accelerated, shot across the street and crashed into the opposite wall, reported a police spokesman. The artist was severely wounded and was taken to the Cedars Sinai Hospital. A little later he succumbed to his wounds.

For decades, Newton photographed for fashion magazines such as Vogue and Elle, before he started to specialize in portrait and nude photography. He achieved worldwide fame with his photograph series like "Big Nudes". They are large format photographs of naked women in cold aesthetic. His nude photographs caused him to be accused of being a women-hater.

Newton was born on October 31, as a child of Jewish parents. At the age of 16 he went to study with the star-photographer Elsie Simon, with whom he worked together till he left Germany in 1938. He went to Singapore and Australia. After the war Newton opened a small photo studio. From there he started his victorious journey through the important fashion magazines like Vogue, Elle and Marie-Claire. With daily fees around $ 5,000, Newton belonged to the best paid photographers in the world. He belonged to the good acquaintances of Salvador Dali, whom he photographed on several occasions. Dali's suggestion, to photograph also his friends, the sculptor Arno Breker and the painter Ernst Fuchs, did not happen due to scheduling difficulties. Newton leaves behind his wife June, whom he married in 1948. They had no children.